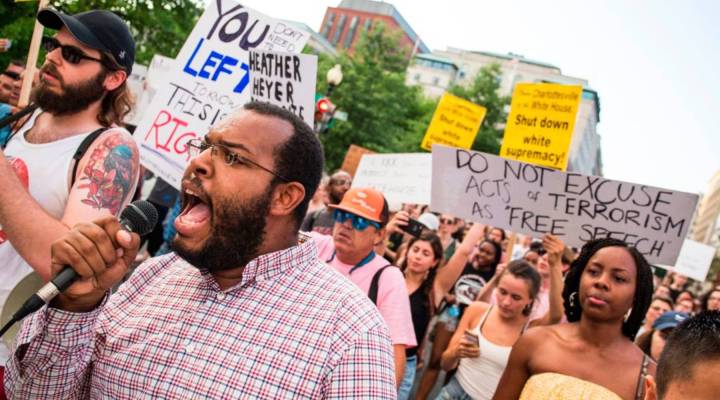 COPY
A crowd marches from the White House on August 13, 2017 in Washington, DC, to a statue of Confederate General Albert Pike, the only member of the Confederate military with an outdoor statue in US capital, during a vigil in response to the death of a counter-protestor in the August 12th 'Unite the Right' rally that turnd violent in Charlottesville, Virginia.  ZACH GIBSON/AFP/Getty Images

A crowd marches from the White House on August 13, 2017 in Washington, DC, to a statue of Confederate General Albert Pike, the only member of the Confederate military with an outdoor statue in US capital, during a vigil in response to the death of a counter-protestor in the August 12th 'Unite the Right' rally that turnd violent in Charlottesville, Virginia.  ZACH GIBSON/AFP/Getty Images
Listen Now

Last weekend’s white nationalist rally in Charlottesville, Virginia has inspired an ongoing discussion about public hate speech and rallying as they relate to employment.

In the aftermath of the rally, several people have been identified on social media using photos taken of them carrying Nazi flags and other white supremacist paraphernalia. In the age of social media, the process of identifying people and tracking down their workplaces was speedy, and in the days after the rally, some people lost their jobs.

Across the country, many of those who attended the rally went back to work. Back to offices with HR departments and co-workers with a wide range of political views, and, in some cases, back to the question of what consequences there are for hate speech when it comes to employment in the private sector.

To discuss these issues, Marketplace Weekend brought in Kerry Fields, a business law and ethics professor at USC’s Marshall School of Business.

Lizzie O’Leary: How does the First Amendment apply to the workplace and can your employer restrict your free speech. I guess that depends kind of on where you are, right?

Kerry Fields: It does. There is a balancing of interests — protection for free speech and rights of assembly — people also have individual rights of privacy. But those are most often observed outside the workplace. Within the workplace, you don’t have the ability to have a public forum and express any idea that you wish. It’s constrained in the workplace.

O’Leary: So what does that mean if someone goes to an event like you know what we saw in Charlottesville? Or let’s say it’s the other way around, somebody goes to a pride march. Can that have repercussions on your workplace position?

Fields: It can. We have to note that last week’s group hatred exercise of bigotry, and carrying weapons and shields and so forth went beyond a normal passive approach. Here there were violent attacks and other things, harming of individuals and a death. So this is going to cause a balance of the interest between the employee and their non-work hours and the employer’s right to control the workplace, essentially obtaining efficiency and high morale among the employees and a public appreciation respect for the company’s products and services.

When you have an individual who poses such a concern for the employer, most states are going to consider the employee as an at-will employee subject only a handful of exceptions. Among that would be: Does the employee have a contract? Does the reason for the termination offend public policy? Now what’s interesting in this particular case is that there are a number of states that protect the employee’s off-hours political speech activities. Forty-two states protect these rights when the person is a public employee, so that a public employee might well exercise political free speech and not fear a dramatic disciplinary action at work.

However private employers may take a different approach because the First Amendment does not apply in its full scope in the private employment sector. So state laws and local laws would be the only remedy is such an individual could look to to protect their job status. So, some of these employees that were involved in this activity might well be facing disciplinary or termination actions at their workplaces.

O’Leary: Is hate speech different? I mean I used the passive example of going to a rally. That’s one thing. But is you know shouting bigoted racist things, using violence or the threat of violence, is it different?

Fields: It can be but we need to recognize that hate speech is not an exception to the First Amendment. As shocking as that may be, the first amendment does protect hate speech. Now when that hate speech combines with a crime committed on another person, or property is damaged because it’s motivated by a person’s bias, then it becomes a hate crime under state and federal law. But speech in itself as distasteful as it may be, is still protected by the First Amendment.

O’Leary: So let’s say you are an employee of a big company, and you feel threatened by the fact that you saw your co-worker on the television in Charlottesville. Do you have the right to go to HR and say “gosh I don’t feel safe around this person”?

Fields: I think in the typical case that would occur because you would say that there is a hostile work environment. It’s a fact specific determination and creates a substantial morale problem for the employer because they have to attend to this immediately to ensure that the workforce remains safe, stable and that their commitment to company values are maintained. There’s really a series of steps that the company could entertain in that situation. By itself is it a hostile workplace? Technically not yet unless that individual brings that speech or behavior into the workplace. So if it’s only in his or her off hours that this activity occurs it’s a harder case to make that it becomes a hostile workplace. But the company should take a series of steps to mitigate the harm that’s going to undoubtedly infuse.

O’Leary:  Do you expect companies to kind of rework their policies, or take a look at their employee policies in the wake of this, and in the wake of public outcries and public attempts to dox people who were at these events?

Fields: I certainly do. I think it’s incumbent upon all companies to revisit their statement of values their mission statements so their core values of integrity, respect and appreciation of diversity in the workplace are reinforced.