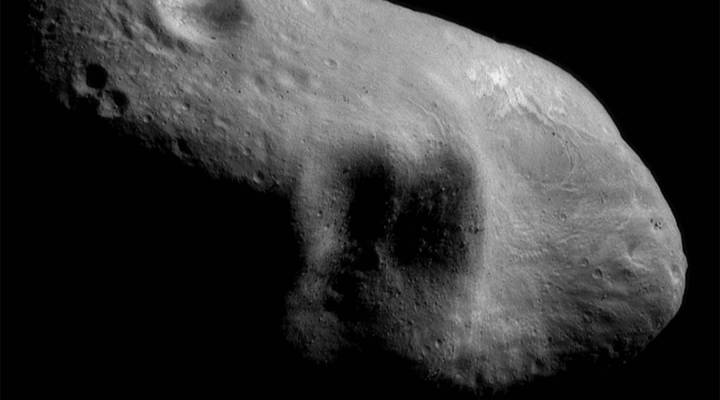 COPY
Space nerds Molly Wood and Kimberly Adams geek out about asteroid mining on the show. Above, an image mosaic of the asteroid Eros, with sunlight coming from the northeast, taken by the robotic NEAR Shoemaker space probe in 2000.  Photo Courtesy of NASA/Newsmakers
Marketplace Tech Blogs

Space nerds Molly Wood and Kimberly Adams geek out about asteroid mining on the show. Above, an image mosaic of the asteroid Eros, with sunlight coming from the northeast, taken by the robotic NEAR Shoemaker space probe in 2000.  Photo Courtesy of NASA/Newsmakers
Listen Now

First, a confession. I make no secret of my love of all things space. I read space sci-fi; I eagerly consume movies and TV set in space (no matter the quality, sometimes); I occasionally cry when anthropomorphized little Mars rovers die all alone on the windy red planet. That kind of thing.

But the good news for me is that space is also an excellent technology and economics story. As we accelerate our race to the beyond, helped along by the grand ambitions of Elon Musk (SpaceX) and Jeff Bezos (Blue Origins), we’ll also start to see the effects of what we at Marketplace Tech are calling the new economics of outer space. And we’ll be covering it: everything from low-earth orbit satellite companies to reusable rockets to the transfer of technology from NASA to the private sector. We’ll look at the jobs, the tech, the investment dollars and the companies and countries that are leading the way.

As it turns out, I’m lucky to have another space geek on staff with which to share my obsession: ace Marketplace political correspondent Kimberly Adams. Kimberly’s editors have kindly agreed to let her occasionally do some reporting on space-related topics (lots of which are policy issues taking place under her nose in Washington D.C.), and so our first space-related segment features Kimberly and me talking about asteroid mining.

It’s a topic that sounds far off in the future, but a few companies are starting to take serious shots at figuring out how to safely and effectively mine asteroids for what could be trillions of dollars’ worth of metals like platinum, nickel, gold and other rare earth metals, not to mention water.

Some metals could be brought back to Earth, but long term, a major goal of asteroid mining is to use the mined materials in space in order to help construct habitats and to use the asteroids’ water for both sustaining human beings and as rocket fuel. That means the asteroids themselves become sort of floating pit stops as humans venture farther and farther into the void. Some experts think asteroid mining is actually the entire linchpin of sustaining human life in outer space.

As Kimberly and I discussed, this isn’t as far off as it seems. Planetary Resources and Deep Space Ventures are two companies actively pursuing this industry; Planetary Resources has backing from Google’s Larry Page and Richard Branson of Virgin Group.

The construction equipment company Caterpillar is also interested in figuring out ways of mining in hazardous conditions, which could have uses both in space and here on Earth. Kimberly spoke with Eric Reiners, who works for Caterpillar.

“We have done some past work with NASA involving remote control and automation technologies,” he told her. “Those technologies have moved forward to actual product, where we can do remote operation of large dozers and even do that over long distances.”

As Kimberly points out, once people and companies start heading off into space and claiming asteroids as their own, things are likely to get messy in the legal department. Luxembourg and the United States both have laws saying that asteroid mining is legal and you can keep whatever you find on the rock, but the 1967 Outer Space Treaty, signed by the U.S. and 124 other nations, seems to say otherwise.

With billions or even trillions of dollars in value floating around on frozen rocks, not to mention life-sustaining water that could be the key to making humans a multiplanet species, expect debate on this to be fast and furious once the first mining company makes it off the ground.

Oh, and bonus: If you’re looking for a good book that deals with all kinds of space science and the mechanics of asteroid mining (not to mention the survival of the human race in outer space), try “Seveneves,” by Neal Stephenson. You’ll be an expert by the time you’re through it.