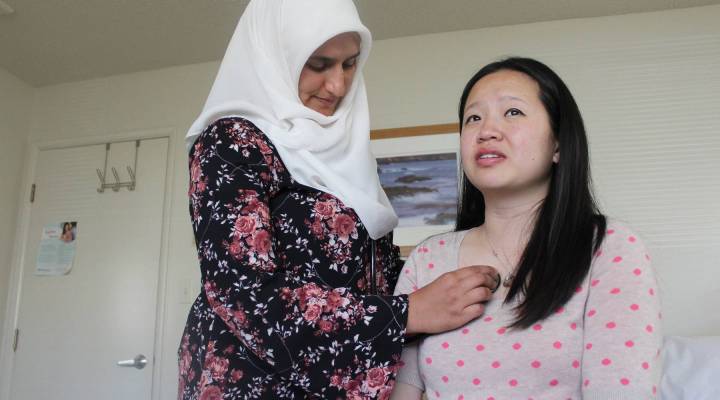 On a sunny day this spring, obstetrician Dr. Sarah Azad walked into her exam room. Just weeks from her due date, Ruby Lin sat on the end of the exam table holding her belly. The two women greeted each other like old friends.

This is Lin’s second baby under Azad’s care, and Azad will be with her from her first appointments through her delivery. This sort of long, personal relationship is not as common as it used to be, but it’s Azad’s favorite part of being a doctor. She runs the same kind of small obstetrics practice that her mother did.

“From the time we were young, my mom’s patients loved her. She was a part of their lives. That’s just always how I’ve seen medical care. So when I came out [of medical school] into practice, it’s something you really want,” Azad explained.

But over the past decade, she’s watched as one doctor after another in her area has sold their practice and gone to work for one of the large hospital systems in town. Today, Azad runs one of the last remaining independent OB-GYN practices in Mountain View, California.

Northern California, where Azad works, is the most expensive place in the country to have a baby, according to a study by Castlight Health, a San Francisco-based health benefits platform. One important reason is the kind of consolidation that Azad has witnessed over the past decade. The region is dominated by a few large hospital systems that keep buying up doctor practices — and that reduces competition, which drives up the cost of health care for everyone.

Azad said she understands why so many of her colleagues have sold their practices and gone to work for hospital systems. She too is struggling to hang on to her independent practice, as it gets harder to run a medical practice in a part of the country with a very high cost of living.

Costs for things like rent, water and electronic health records keep going up, but for the past seven years, she said, insurance companies have refused to pay her more for the services she provides. They said she just doesn’t have enough market power to demand more money.

“One insurance contract responded saying you don’t even have 2 percent of market share. Basically drop our contract or not — it doesn’t affect us.” Azad said another insurer told her they couldn’t raise her rates because they had to pay too much to the larger health systems in town, like Sutter Health and Stanford Medicine.

Under the terms of their contracts, hospital and insurers are prohibited from disclosing their negotiated rates. But a Kaiser Health News analysis of claims data from Amino, a health transparency company, found that independent doctors in the Bay Area are reimbursed an average median amount of $2,408.45 for a routine vaginal delivery, which includes prenatal and postnatal visits.

That compares to $5,238.13 for the same bundle of services for Stanford physicians and $8,049.84 for doctors employed by University of California-San Francisco.

“It just astounds me,” said Azad, of the discrepancy in rates.

Amino provided KHN with median billing amounts for Bay Area obstetricians. KHN used a Medicare provider database to determine where each doctor worked. In cases where the doctor’s employment status was unclear, a reporter retrieved the information by calling the health system or physician directly. KHN then calculated the average median billing amount for a routine vaginal birth for each health system.

Right across the street from Azad’s office is another obstetrics practice, where Dr. Kenneth Weber works. He was in independent practice for more than 20 years, but like Azad, the insurers wouldn’t raise his rates. So in 2015 he went to work for Stanford Medicine. He still does the same job at the same hospital for the same pay, but the rate insurers pay for his services has doubled.

“It doesn’t make a lot of sense to me from the insurance company’s standpoint, because they’re losing all these doctors to the bigger groups and having to pay more. And if they just had negotiated with us fairly, I think we could come to some middle ground,” said Weber.

The insurance companies that work in this region would not comment.

Weber said going to work for Stanford has had some real benefits, and he is glad he doesn’t have to run a business anymore. But he said the additional money paid by insurers goes to the hospital system. “None of these are good deals for doctors. It’s not like selling out to anybody is making any money for us,” he said.

A Stanford Medicine spokesperson, Samantha Dorman, explained that the health system incurred significant costs when it integrated new provider groups. For instance, many of the independent practices were not yet on electronic health records and needed updated equipment. Dorman added that Stanford reduced physician charges a few years ago to be more in line with other practices.

And in emails, Stanford and several other large health systems in the area all argued that employing doctors allows them to improve the quality of their care. But Kristof Stremikis, associate director for policy at the Pacific Business Group on Health, which represents employers, said that studies suggest that is not the case. “All of the evidence that we see shows that the quality in these larger systems is the same or worse,” he said.

But what’s clear is that these big systems cost a lot more money. So when a town like Mountain View goes from having dozens of independent practices, to just a few large systems, the cost of health care increases for everyone.

Most patients have no idea what they’re paying until they’re left holding the bill.

This story is produced through a collaboration between Marketplace and Kaiser Health News.