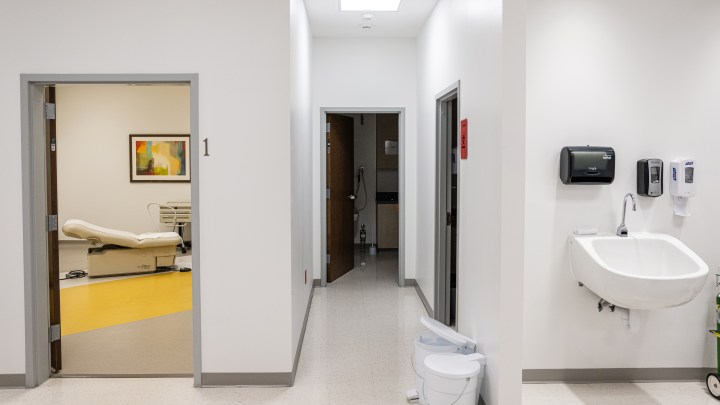 COPY
Nearly 40% of residency programs do not offer routine access to abortion training, according to one estimate. Jon Cherry/Getty Images

Nearly 40% of residency programs do not offer routine access to abortion training, according to one estimate. Jon Cherry/Getty Images
Listen Now

When Roe v. Wade was overturned last month, access to abortion became illegal or uncertain in nearly half the country.

And with that, accessing abortion care training has become incredibly difficult for medical students and residents. For many of those who plan to perform abortions as part of their medical career, they’ll have to go to great lengths to learn the necessary skills.

Medical Students for Choice is one of several programs across the country that helps connect those students with clinics. The work has always been difficult, since it can involve sending students hours away from where they live and coordinating transportation and lodging. But now, the job’s even harder.

“We had to tell 50 med students that they weren’t going to be able to receive in-clinic training for this year simply because the clinics are overwhelmed, and, you know, universities are scrambling to try and save their residency programs,” said Executive Director Pamela Merritt.

Just as people in some states have had to travel to clinics hours away or across state lines to get an abortion, many aspiring doctors have had to do the same. Now they’ll have to travel farther.

“It really could be like flying across the country,” said Kristin Simonson at the Ryan Residency Training Program, which helps hospitals implement OB-GYN curricula.

Not only that. It’s possible that students and residents in states limiting abortion or outlawing it altogether may not be able to learn how to perform them at all, because lawmakers could restrict abortion training at public hospitals and schools that are funded by state governments.

Limited training could result in underprepared or unprepared doctors, especially in states where abortion is restricted to rare circumstances, like when a mother’s life is in danger.

“I fear that, you know, in a field where repetition and volume are the main predictors of confidence and competence in any procedure, that that competence and confidence will suffer,” said Dr. Kavita Vinekar, an OB-GYN professor at the University of California at Los Angeles.

Gaining that competence may become a bigger priority for students. “I think this is a huge concern for many, many medical students,” she said. “And it’s going to play heavily into how they apply for programs.”

And where they apply for residencies.

“It’s actually one of the first things I’m considering on where to apply,” said Ian Peake, a fourth-year med student.

Peake is only looking in states like California, which has moved to protect abortion. This wasn’t his original plan; he’s always wanted to help patients in his home state of Oklahoma, where abortions are now illegal except to save the life of a pregnant person or if the pregnancy is the result of reported rape or incest.

“It’s very upsetting to know that I’m going to have to leave my home to pursue this or drop it altogether if I wanna stay home,” he said. “It’s like, that’s the decision that you’re kind of left with.”