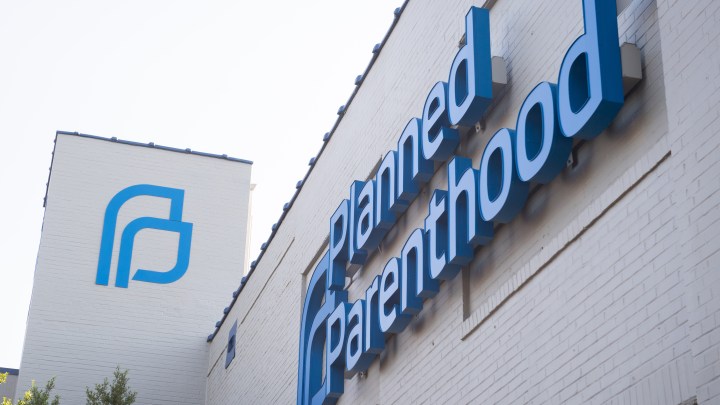 COPY
A Planned Parenthood center in Missouri in 2019. In states where abortions are banned or restricted, some clinics are reorienting efforts to connecting patients with abortion funds or out-of-state clinics. Saul Loeb/AFP via Getty Images

A Planned Parenthood center in Missouri in 2019. In states where abortions are banned or restricted, some clinics are reorienting efforts to connecting patients with abortion funds or out-of-state clinics. Saul Loeb/AFP via Getty Images
Listen Now

Last year, Allison Foelber of Goodlettsville, Tennessee, learned late in the first trimester that her unborn child had no skull.

But she said her obstetrician couldn’t do an abortion, because it was considered elective. Planned Parenthood couldn’t perform the procedure either because of staffing challenges. She had to book a flight to Atlanta.

“It actually hit me before I even got on the plane,” she said. “As I was doing the logistics for the abortion, I constantly was like, ‘What if I didn’t have the money?’”

It was $700 for a last-minute flight and nearly that much for a couple of nights in a hotel. Adding in the cost of the abortion, which was not covered by insurance, she was out well over $2,000. And she had help — a sister flying in to watch her 1-year-old so her partner could travel with her.

Plus, as a marketing executive, she had as much paid time off as she needed. Foelber said she realized she faced these challenges from a perch of privilege.

As of this week, when prospective patients call Planned Parenthood clinics in Tennessee — where abortions are now banned at six weeks and will likely be banned completely next month — they’re linked up with a navigator who connects them with clinics in Illinois and Virginia where abortions remain legal.

Similar efforts have spun up in other abortion-ban states. Those who need to leave the state can request gas cards, paid accommodations or more. They are also informed of abortion funds that can also help with additional expenses.

The alternative to out-of-state travel for Dr. Edward Hills’ patients is trying something potentially dangerous on their own.

“We are very fearful about that,” he said. “The sky is falling.”

Hills is the interim chair of the OB-GYN department at Meharry Medical College, a historically Black school. Many of his patients are low-income.

“Even though people are poor, when it comes to these kind of decisions, money comes from somewhere,” he said.

But Ashley Coffield, CEO of Planned Parenthood of Tennessee and North Mississippi, said she doesn’t want money to get in the way for any patient. She said a relatively small expense at the moment could set back a family for a lifetime.

“We know when somebody is forced to give birth when they’re not ready, that it can just devastate their educational opportunities, their economic and job opportunities, and that gets passed on for generations,” she says.

In the court case that overturned Roe v. Wade, more than 100 economists and researchers submitted a court brief effectively supporting abortion rights. They cited studies showing delayed motherhood makes women more likely to finish college and land a professional career, and the effects are especially noticeable among Black women. Another brief filed by women scholars argued that modern contraception, among other factors, has made the economic argument moot.

Coffield says the long-term implications are cause for Tennessee clinics to keep playing a role in abortions. But there’s already a public effort to throw up roadblocks: Anti-abortion activists say their next legislative fight is trying to limit abortions across state lines.