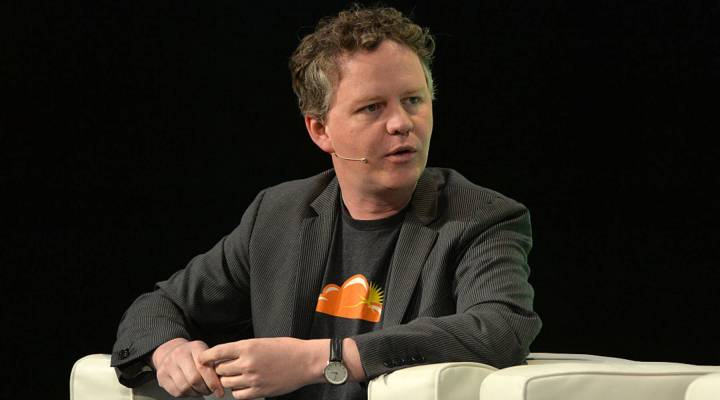 COPY
Matthew Prince, CEO of Cloudflare, says the company has tried to be neutral. Anthony Harvey/Getty Images for TechCrunch

Matthew Prince, CEO of Cloudflare, says the company has tried to be neutral. Anthony Harvey/Getty Images for TechCrunch
Listen Now

Last week, the CEO of an important but generally not well-known technology company sent an all-staff email. That on its own may not sound like front-page news, but this email was a little bit different. It was written by Cloudflare’s Matthew Prince, and it said that his company would stop providing service to The Daily Stormer, a neo-Nazi, white supremacist website, following the violence in Charlottesville, Virginia. The email read, in part, “Earlier today Cloudflare terminated the account of the Daily Stormer. … It was a decision I could make because I’m the CEO of a major Internet infrastructure company. … No one should have that power.” Marketplace host Kai Ryssdal talked to Prince about his somewhat conflicted decision. (Cloudflare sometimes underwrites Marketplace.) The following is an edited transcript of their conversation.

Matthew Prince: So Cloudflare has about 10 percent of all internet requests flowing through us, and we have traditionally tried to be neutral, not using our own morals to choose who is and who is not online. The challenge was with this website, The Daily Stormer, that they, at the end of the day, were just jerks. They did some things that were violating our policies and creating an enormous distraction for us, and ultimately last week, we made a call, I made a call, to say that it just wasn’t worth keeping them on our network and keeping them online.

Ryssdal: I wonder though if rather than taking them offline there was another way to deal with this, instead of, as you said in your blog posts, waking up one morning and being in a bad mood and throwing them off?

Prince: Yeah, I think that’s something that I’ve worried about for the last week. It’s really a deep concern. If you have infrastructure companies making choices about who can and cannot be on the internet, I would sort of analogize it to the telephone company listening in on your phone calls and deciding that they don’t like what you’re talking about so they turn you off. Our challenge was that we’d been trying to have a conversation about who should be regulating and effectively censoring the internet. And yet the question just kept coming back to “Why do you support Nazis?” Obviously, we don’t support Nazis. The content was repugnant. But I do think it’s really important for us to have a conversation about who and when and where and how the internet will get regulated and will get censored.

Ryssdal: Since I have you on the phone, and since you brought it up, and since you are the guy who unilaterally did regulate the internet, in this case, who do you think ought to be doing it? Should you guys be a utility and public utility commissions and hearings and all that?

Prince: That’s probably above my pay grade, to tell you.

Ryssdal: You run the company. Come on.

Prince: Sure. I run the company, but I don’t run the internet.

Ryssdal: Except in this instance.

Prince: That’s right. And I think what we need to talk about is that you should be able to know what the rules are when you participate in a system. You have transparency. There should be accountability. And I worry that if the people deciding what can and cannot be on the internet are a group of tech executives like myself, that we inherently can’t follow principles of due process. Again, I’m not sure who the right person is, but I do think that there needs to be some aspect of rule of law, and I’m not sure that we followed that when we made the decision we did last week.

Ryssdal: Let’s say the ACLU does something you vehemently disagree with. And, in fact, they start saying that Cloudflare supports whatever that action is. You going to shut them down?

Prince: Again, what I hope comes out of this is an understanding that there’s a real risk and a real danger of infrastructure companies like Cloudflare being the internet police. And as we had tried to hold that policy for a long time. But that policy was a policy that we came up with as a small team. Now we’ve had a debate and a public discussion. I get to talk to you about this, and I love that you’re holding my feet to the fire on this. And my hope is that what comes out of this is a policy which has more legitimacy because it’s come out of a public discussion and not simply been something that Cloudflare decided in and of itself. Which is a really good way of not answering your question.

Ryssdal: You know, I hold your feet to the fire and you decline to answer, that’s fine. Where does this go then? I mean, you have amplified this issue in a way that has gotten you noticed, has gotten the company noticed, but also, in theory, has gotten the issue notice. Now what happens?

Prince: I think that there are a number of stakeholders. Google, for instance, made the call two days before we did that they would not allow this particular website, The Daily Starmer website, to use their registrar service, which is a service that allows you to purchase domains. But Google runs a lot of other services as well. And they didn’t block The Daily Stormer from any of those things.

Ryssdal: Yet, right? I mean, there’s a yet that has to be said there. If Sergey Brin and Larry Page wake up in the same bad mood that you woke up in that morning, then they can do whatever they want.

Prince: That I think is why we need to be having this conversation, and there’re stakeholders that aren’t just technology companies. The’re regulators, law enforcement, civil society organizations, content creators, content consumers. Any one of them can be making editorial decisions about what is and is not allowed online. And we need a social contract as to who can and can’t do that. And that needs to be transparent.

Correction (Aug. 23, 2017): A previous version of this story misspelled Matthew Prince’s name. The text has been corrected.