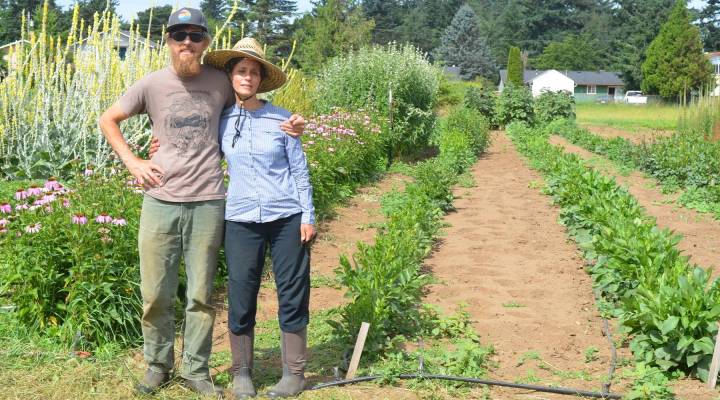 COPY
Brian Campbell and Crystine Goldberg are breeding seeds for the Open Source Seed Initiative on their farm near Bellingham, Washington. Eilis O'Neill/ for Marketplace

Brian Campbell and Crystine Goldberg are breeding seeds for the Open Source Seed Initiative on their farm near Bellingham, Washington. Eilis O'Neill/ for Marketplace
Listen Now

The seeds planted by farmers and gardeners used to be in the public domain. But then, in the 1980s, new laws and court rulings made it easier to patent them.

Ever since then, companies like Monsanto and DuPont have been patenting seeds modified by company scientists. That prevents farmers from harvesting seeds and planting them the following year. Now, most of the seeds available for farmers are owned by just a handful of companies — and a couple of proposed mergers might reduce that number even more.

One group of plant breeders is trying to change that by giving open access to the seeds they breed.

Greg Traxler, an agricultural economist at the University of Washington, said patenting seeds is a good thing. Without patents, he argues, “no one is going to invest in improving seeds. The whole idea of patenting is that you provide incentive for companies to produce seed that is yielding more every year.”

But others say those increased yields have come at a cost, and some are trying to develop an alternative model: the Open Source Seed Initiative.

Seed breeders involved in the initiative take seeds from the public domain and breed a new variety — like the red spinach Brian Campbell developed on his farm near Bellingham, Washington.

“We’ve been working with it for years and stabilized the genetics on it,” Campbell said.

Instead of patenting the spinach, Campbell and his partner, Crystine Goldberg, said anyone who buys the seeds can gather them, reproduce them, even modify them and sell the new varieties  — as long as they don’t patent or restrict those seeds.

“We just really wanted to get seeds out there that everybody could breed what made sense for their region or their garden or their taste,” Goldberg explained.

Goldberg and Campbell want to give farmers more choices about where to buy their seeds and what varieties are available. And they’re also hoping to address another problem: if there are limited seed varieties, those varieties might have the same vulnerabilities.

“We’re all at risk of climate change or even drought and pests that could pretty easily wipe out crops and threaten the resilience of our food supply,” said Philip Howard, a professor at Michigan State University.

So far, the 38 breeders involved in the initiative have licensed nearly 400 seed varieties.