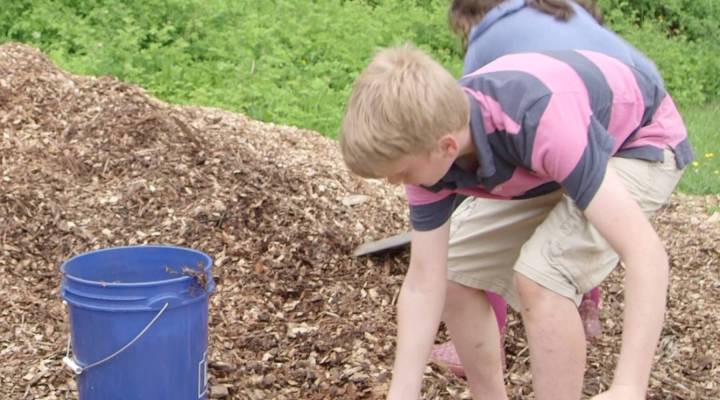 On some days, students at the Harpswell Coastal Academy don’t even see a classroom. Behind the school, sixth-grader Easton Dundore shovels mulch into an outdoor hoop house he helped design with a few other students.

It’s a class project that Dundore said he enjoys. “You get to work with other people, and you see if you like that,” he said. “It’s just a really good opportunity before starting a job,  to do this kind of thing.”

It may seem a little strange to hear a sixth-grader talk about starting a job. But that’s one of the goals of the Harpswell Coastal Academy. The school formed about five years ago, when residents of the small, coastal fishing village of Harpswell, Maine, began to voice concerns about their kids’ futures.

Fishing has long been one of the economic drivers of many towns in coastal Maine. But overfishing, increased regulations and climate change have largely wiped out many of the area’s fisheries. In Harpswell, the number of residents with commercial fishing and harvesting licenses fell by more than 25 percent since 2000.

Harpswell Coastal Academy founder John D’Anieri said with an unclear future, residents began to worry that their kids would be less engaged in school and more likely to drop out.

“That a lot of our kids aren’t able to envision a future for themselves,” D’Anieri said. “And they particularly aren’t able to find a way to live in Maine.”

The solution was to create a new charter school focused on the idea of work-based learning — designed to put students into the community and expose them to different kinds of jobs in their state.

“We want to create things in these communities that kids are excited to be a part of,” said Harpswell farmer Joe Grady, who helped found the school. “That’s how they stay here as adults.”

At school, kids still go to math and English classes in the morning and have to meet academic standards. But teacher Micah Depper said much of the rest of the day is spent on large, group projects to teach skills that the school feels employers are looking for.

“Perseverance. The ability to revise work,” Depper said. “So at our school, our students help serve lunch. They take turns cleaning up the lunchroom. Taking out the trash. Yes, cleaning the bathrooms.”

And once students get to high school, they’ve got to head out into the community and apply these skills in required internships. The school has set up partnerships with local businesses to do this, like a restaurant called the New Beet Market.

The Harpswell Coastal Academy buys student lunches from the New Beet Market. And the restaurant takes on four or five interns each year. It starts with simple dishwashing, but some students help with finances and create school lunch menus.

The restaurant’s owner, Jamie Pacheco, said it’s important for students to get inside a business while they’re still young. “I do think it’s really important that kids learn how to be a part of the workplace,” she said.

But Pacheco added that a few kids have had to abandon their internships because they couldn’t handle the stresses of the workplace. “It’s interesting being a part of that lesson,” Pacheco said. “Kids’ first jobs – it’s an adventure!”

Monique Coombs with the Maine Coast Fishermen’s Association said she thinks this is important for her industry, too. She said that if kids pursue career paths like technology or public policy, that could help everyone, including fishermen.

“You know, value-added products. Marine resources. Things that support the industry,” Coombs said. “To make sure there’s a good future for young kids in the industry.”

It will likely take years or decades before the town will see if the strategy works. But Coombs hopes this shift is led by the young people who are already here.