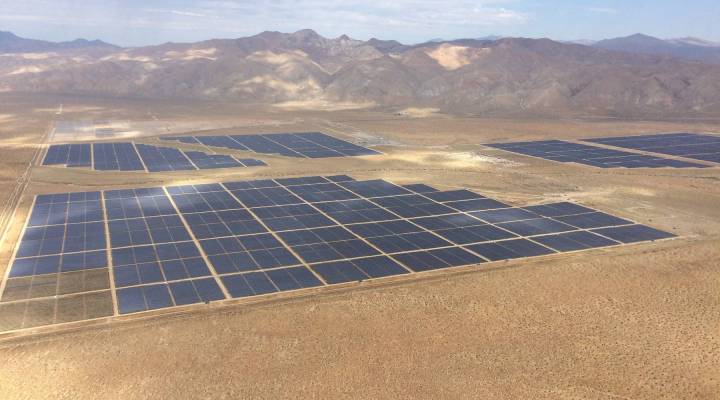 COPY
The Beacon Solar Farm will provide 250 MW of renewable electricity to Southern California when it's completed this year. Jed Kim

The Beacon Solar Farm will provide 250 MW of renewable electricity to Southern California when it's completed this year. Jed Kim
Listen Now

Chris Linden is a writer who lives in Crystal Lake, an outer suburb of Chicago. He drives about an hour to get to work. His car?

He said he has toyed with the idea of an electric car, but he’s wondered how bright the green halos on them really glow. He wrote:

“I’ve always wondered … Does an electric car actually create less pollution and conserve resources, or am I simply substituting one form of pollution and resources (fuel exhaust) for another (power plant exhaust)?”

His question is why some people have playfully referred to electric vehicles not as EVs, but as EEVs.

“Elsewhere emissions vehicles,” said Kevin Book, managing director of ClearView Energy Partners. Book said to measure how clean an electric car is, you have to factor in where it operates and gets charged. “Different states have different generation mixes,” he said. “Different local sources of power create different impacts.”

In Los Angeles, for example, the energy mix is pretty green. I recently boarded a helicopter owned by the Los Angeles Department of Water and Power to get an overhead look at how widespread renewable power has become in Southern California. About a 40 minute flight northeast of LA, we reached the Beacon Solar farm, a massive array of black glass grids spreading out over the sand. The project, when completed, will provide 250 megawatts of generating power, which can provide an emissions-free source of fuel for electric vehicles.

The solar farm was just one of several visible from the sky. LADWP helicopter pilot Jeff Goldman said he’s noticed the growth in the two years he’s been flying for the department.

“There’s definitely more solar farms going up,” Goldman said. “You can see they’re actually being worked on out there. I see a few extra patches — dirt patches — popping up where they’re going to put more panels down.”

Just as solar has spread in the region, so has wind power.

Wind turbines dot the landscape in several portions of the Mojave Desert.

According to initial estimates, LADWP received 29 percent of its power from renewable sources in 2016. It expects to get at least a third by 2030. LA already has about 27,000 electric cars on the road.

But that’s the view from California, a state that’s an early adopter of pretty much all things green. Where Linden lives in Illinois, a company called ComEd provides power. Last year, it got 2 percent of its power from wind, zero from solar and 35 percent came from coal.

However, the past decade has seen a lot of renewables come online. Cleaner natural gas has also boomed, and newer coal power plants are burning cleaner.

“Today, the average power generation mix is a lot greener than when it was more coal-intensive,” Book said. “As a result, you have an electric vehicle burning today’s power mix would get about 124 grams of carbon dioxide per mile, compared to that conventional vehicle at 296. So less than half the carbon intensity.”

So, on average, no matter where you are, driving an electric car would shrink the emissions footprint by at least half compared to Linden’s 2010 Corolla.

“The days of the elsewhere emissions vehicle, here in the United States at least, are for the most part over,” he said.

Even if carbon emissions were equal between driving a typical internal combustion engine vehicle and charging an electric vehicle using power from a fossil fuel plant, experts said there could still be an overall health benefit from driving an EV. The emissions that come out of tailpipes and power plants contain more than just carbon dioxide. There’s also ozone, particulate matter and carbon monoxide.

DeShazo said driving an electric vehicle, even if it’s fueled by a polluting power plant, moves these “criteria air pollutant” emissions to power plants, most of which are located farther away from where people live.

“If driving electric vehicle reduces the number of people exposed to harmful pollution, then that improves people’s health and society’s well-being. Even if total emissions don’t go down, they just get moved to a place where there are fewer people,” DeShazo said.