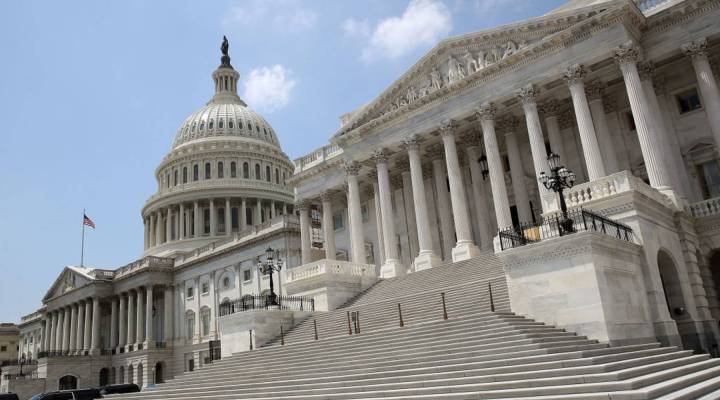 COPY
The Senate side of the U.S. Capitol. The Senate is scheduled to return from summer break on Sept. 5. Mark Wilson/Getty Images

The Senate side of the U.S. Capitol. The Senate is scheduled to return from summer break on Sept. 5. Mark Wilson/Getty Images
Listen Now

Leaders in both houses of Congress seem bound and determined to put the health care debate behind them and move on to tax reform. Various and sundry interest groups have made it clear that’s what they want to do too, including the U.S. Chamber of Commerce. Marketplace host Kai Ryssdal spoke to Neil Bradley, the senior vice president and chief policy officer at the U.S. Chamber of Commerce, about tax reform and how it impacts growth in our economy. The following is an edited transcript of their conversation.

Kai Ryssdal: There has been a sliding timeline of when the White House is hoping to get tax reform done by. The latest, I think, was from Secretary Mnuchin. The other day he said November is when he wants it past the Senate. How realistic do you think that is?

Neil Bradley: Well, it may slip a little bit past November. You know, it’s good to set deadlines even if sometimes you don’t hit them. But we’re at least appreciative of the sense of urgency that the secretary’s displaying.

Ryssdal: Your boss, the president and CEO of the chamber, Tom Donohue, wrote an open letter to members of Congress 10 days ago in which he basically said, well not basically, he flat out said, “Get tax reform done, or else.” What’s the “or else”?

Bradley: Well, what he said is that failure is not an option and that when it comes to evaluating candidates who the chamber’s going to support for public office, one of the things that we’re going to take into consideration is did they contribute to helping tax reform get across the finish line or did they stand in the way? A candidate, elected official who’s standing in the way of tax reform is not someone who’s looking out for American families or the economy.

Ryssdal: You’re going to campaign against them, is that what I hear you saying?

Ryssdal: He said in this letter, Mr. Donohue, he said, “We will be focusing on individuals with a demonstrated a willingness to govern, which means reaching consensus so that legislation can be passed and enacted into law.” That sounds like you’re saying you guys have got to compromise.

Bradley: That’s exactly what we’re saying. We’ve got a lot of folks who give lip service to what they’re for, and if only everyone else would agree with them, it would get done. That’s not the way the legislative process works. Everyone’s got to give and take. We’re willing to give and take as part of the business community. We know that our perfect bill’s not going to become law. But we want to see something happen here. And if we’re willing to compromise, members of Congress need to be willing to compromise as well.

Ryssdal: Where does this go economically if the Congress cannot get its act together? I mean, you guys in this letter, Mr. Donohue in this letter, was harsh about the party with which the chamber has been traditionally aligned.

Bradley: I think your first question is the real important point — what happens economically if we don’t get this done? We’ve had a decade of basically 2 percent growth. That’s never happened before in modern American history. You know, Americans, since World War II, are used to 3 percent plus growth. That’s 50 percent bigger economic growth than what we’ve experienced in the last decade. There is no way, in our opinion, that we’re going to get back to the levels of economic growth that we all want minus tax reform. So that’s why it’s so important, that’s why there have to be consequences if it doesn’t get done.

Ryssdal: I’m glad you mentioned that 2 and 3 percent growth thing. Mick Mulvaney, the director of the OMB, has been very vocal about his desire, about the president’s desire, to get to 3 percent economic growth. Tax reform can’t do it by itself, as much as the chamber may want to think so. What else has to happen for the Trump administration to get its economic agenda in gear?

Bradley: Well, we actually would agree with that. Tax reform alone won’t get it done. You do have to have regulatory reform, you have to have pro-growth trade policies. We have to deal with our cybersecurity threats. But if we did everything else right and we didn’t get tax reform done, we’re not going to get to the economic growth that we all want to see. So tax reform is kind of the indispensable element. It’s not enough by itself, but if you did everything else and didn’t do tax reform, we’re going to end up falling short.

Ryssdal: Why is tax reform the thing in your mind?

Bradley: Well, because we have the most uncompetitive tax code in the industrialized world. We we tax our businesses at the highest rate. We’re one of the only countries in the world that continues to tax businesses both at home and abroad, this kind of double taxation. Our small businesses have one of the highest tax rates in the world, as well. It’s just a system that’s punishing to those who want to grow their business or start a new one. It’s been 31 years since we last reformed the tax code. The rest of the world’s passed us by in those three decades. And it’s having real consequences for businesses, and for workers, and for families.

Ryssdal: The catch of course is the last time we did tax reform and gave corporations a break on repatriated taxes and all of those things, companies didn’t actually pass down to workers, right? They did stock buybacks and handed out dividends to shareholders. It didn’t get out through the economy.

Bradley: Well, I think what you’re pointing to is the reason that we need broad comprehensive tax reform. That was a one-off scenario for a temporary break to repatriate funds into the U.S. And we shouldn’t be surprised if people don’t make permanent decisions based on very temporary tax relief measures. That’s why you have to reform the whole system. If you want a business to invest in a new factory in America, if you want them to hire new workers, it’s very difficult for a business to do that when what the government says is “Well, we’ll give you a tax break for a couple of year, but then we’re going to take it away from you.” If you can give me the certainty of what the government’s going to be doing on taxes for the long term, then I have the freedom to invest and to grow the business without having to worry about Uncle Sam.