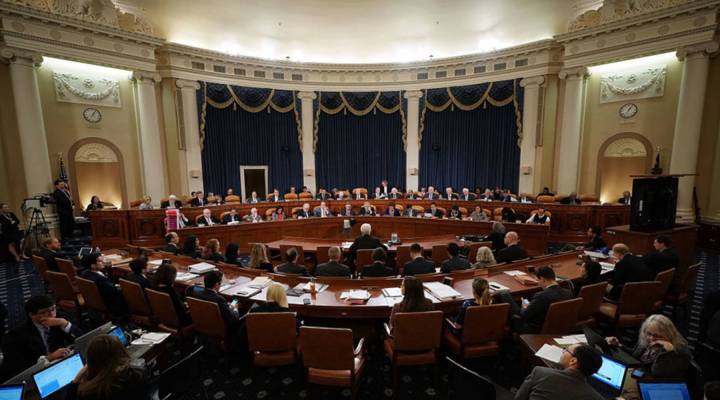 If you’re a tax policy person, the House Committee on Ways and Means is the place to be this week. The panel is marking up — that is, formally considering — amendments to the GOP bill that was made public last week. Along with that markup comes public scrutiny of what’s in and what’s out of the proposal, as well as pressure from various sides of the debate. Neil Bradley is the senior vice president and chief policy officer at the U.S. Chamber of Commerce. Marketplace host Kai Ryssdal spoke to him about his thoughts on the bill. The following is an edited transcript of their conversation.

Kai Ryssdal: I’m going to start with you the same way I started with Kevin Hassett, the head of the Council of Economic Advisors of the White House, on Friday. Now that this bill has been out for a little bit and some of the knives are out, frankly, how are you feeling about it? What are you thinking?

Neil Bradley: I still feel very good. It’s a pro-growth bill that, if enacted, will be substantially better than our current tax code and would really boost the economy, and more importantly, middle-class wages.

Ryssdal: There’s a big if right there, if enacted. How are you feeling about that little bit right there?

Bradley: Well, if right now, but we’re looking forward to when it’s enacted. I think they’re going to get the job done. And they may not meet the president’s deadline of Christmas for enactment, but it won’t be too long after.

Ryssdal: We had you on the program back in August-ish, talking about a note that the CEO of the Chamber, Tom Donohue, had sent out to members of Congress, which said in essence, “Look, you’ve got to hook us up with tax reform, or we are going to campaign against you.” I want to dive into that a little bit because there are some members of the Republican Party who have come out and said, “You know what, I can’t support this bill as it is right now.” Where are you on the, “You know what, you’re with us or you’re against us”?

Bradley: Well, we’re open to changes being made to the bill. But the core structure has got to get enacted. If folks are going to stand in the way, then we are going to hold them accountable next November. And so we engage in a lot of politics. And one of the things we’re going to look at when we evaluate candidates is “Did you try to make the perfect the enemy of the good, and in doing so, try to block our first real chance of pro-growth tax reform in three decades?”

Ryssdal: Yeah, but you understand how that can be counterproductive, right? Let’s look at Peter King, Republican from New York, which is a high tax state. One of the things that Chairman Brady of the Ways and Means Committee has said is “Listen, we’re going to order state and local deductions,” and Peter King said, “No I’m not doing that.” You’re going to campaign against Peter King, who has been a Republican stalwart for decades?

Bradley: Well, again, I’m hopeful that we’re going to get a product that Peter King, and frankly every other Republican, and hopefully some Democrats, actually vote for. If you can’t find something that you don’t like in the bill, you’re not looking hard enough, which is why we encourage people to judge it on its totality. The bill in its totality is going to be good for Peter King’s constituents in New York and frankly every other members of Congress’ constituents across this country.

Ryssdal: What are you looking for that you would accept changes-wise? Your note to folks the other day when this bill was introduced said you’re looking for the “exact right policy mix.” What is that policy mix?

Bradley: What’s important is the structural change of lowering overall rates, broadening the base, moving to a territorial system — those are the kinds of changes that are going to generate economic growth. Keeping that pro-growth core is what’s essential.

Ryssdal: Seems to me what you’re saying is, “Listen, we’ve got to keep these corporate cuts. We can negotiate on everything else.”

Bradley: We have to keep the fundamental reforms. We have to move towards a system where we no longer are the outlier in the world who taxes businesses on their worldwide income, that we keep the lower rates for small businesses and big businesses. Those are key critical elements of this reform.

Bradley: Well, it’s corporate rates, it’s the pass through rates for individuals, and frankly, it’s encouraging more investment. We want more people across this country, no matter what kind of business they are in, making those kind of investments that create new jobs that raise wages.

Ryssdal: New topic. How worried are you about the fact that a good chunk of this bill, a trillion and a half dollars’ worth, is not paid for, that it’s going to boost the deficit by a trillion dollars over 10 years?

Bradley: I’m not, because that looks at it in the way that only Washington accounts for for tax relief. If we grow the economy, which this bill will do —

Ryssdal: Come on, which this bill will do, we think, I mean you’ve got a caveat that, right?

Bradley: I’m sure folks will.

Ryssdal: Except for the fact that tax cuts never really do pay for themselves, right?

Bradley: Well, no one is saying that it’s going to completely pay for itself, but there’s no question that the last thing that you can do to begin addressing the federal debt and deficit is have an economy that grows at something bigger than, you know, mid-2 percent a year. You simply can’t close the deficit and debt gap that we have with this little of economic growth. That’s just impossible.