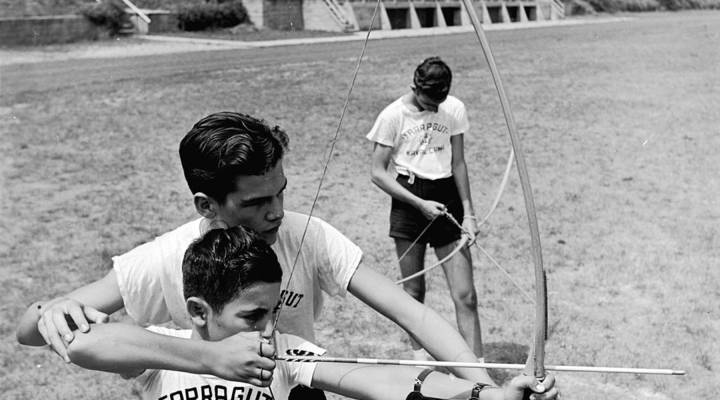 COPY
At the Admiral Farragut Academy summer camp a senior cadet instructs a younger camper on how to use a bow, circa 1950. Douglas Grundy/Three Lions/Getty Images
Brought to You By

At the Admiral Farragut Academy summer camp a senior cadet instructs a younger camper on how to use a bow, circa 1950. Douglas Grundy/Three Lions/Getty Images
Listen Now

It’s a perfect summer day in Western Massachusetts, and Dan Zenkel is grinning while he watches soccer drills on one of his three outdoor fields.

“So that is the greatest woman soccer player of all time, supervising a bunch of kids,” Zenkel said, chuckling.

The woman running the drill is two-time Olympic gold medalist and World Cup winner Mia Hamm. Landing Hamm was great for Zenkel, who owns this property and the camp on it — the Berkshire Soccer Academy for Girls. Dozens of girls are spread across the fields, with coaches and camp counselors spread throughout. Just down the hill, several cabins sit beside a glistening lake.

A lot of camps these days are specialized, like this one: Soccer camps, coding camps, language camps. Zenkel says that more and more, parents want their kids to come away from summer with a hard skill learned. Camp is an $18 billion industry, according to estimates from the American Camp Association, and tuition has increased steadily for decades. Many sleep-away camps now cost more than $10,000 for the summer.

This professionalization of the industry is a long way from summer camp’s origins. In the late 19th century a few rugged camps for boys started to spring up. Abigail Van Slyck, a historian and the dean of faculty at Connecticut College, says a “frontier thesis” had taken hold. This was a belief that “the thing that really made Americans distinct from their European relations was the fact that they had had their characters forged in moving the frontier,” Van Slyck said. “Once urbanization and modernization had ended the frontier, there was lots of concern that we were going to become soft.”

By the early 20th century, industrialization had run rampant in American cities. “The Lower East Side [of Manhattan] is your classic example,” said Gary Zola of the American Jewish Archives, who has written on the history of early summer camps. “You have a burgeoning labor class, blue collar workers, massive immigration from Eastern Europe flowing into these closed and very impoverished neighborhoods. Children go to work in factories.”

In response, wealthy benefactors and social service organizations started to bring kids up from the city to the wilderness, for fresh air and respite. “This really injects new life and new vigor into the camping movement,” Zola said.

Back then, most camps were run by teachers as a second job. The business started changing with, of all things, President Eisenhower’s interstate highway system.

“The interstate highway system made these previously inaccessible properties more accessible,” said Zenkel. “And so all of a sudden, the property values started to rise.”

Zenkel says that drove up real-estate costs immensely. Camps that couldn’t attract campers started going out of business, or selling their real estate. This turned, in the 1980s and 1990s, into a classic consolidation story.

“There were about half the number of camps in 1998 that there were in 1970,” Zenkel said. “And the size of the camp was about two- to two-and-a-half times larger.”

These days, you often see 600-700 kids at a co-ed camp. While we may think of running a camp as an avocation, it’s now a year-round business: Camp directors spend the other three seasons preparing for summer. And Zenkel says the business is lucrative.

“The margin on a camper once you’ve covered your costs is probably 60 percent,” Zenkel said. “They get very profitable. Camps with say a gross of $2,500,000 to $5,000,000, you can count on a 25 percent to 30 percent margin. Zenkel says personnel is the biggest expense, followed by food. But the greatest fixed cost is still that beautiful perch on the edge of a lake.

Business aside, says Tom Rosenberg, CEO of the American Camp Association, you don’t do this work unless you really care.

The cost of summer child care