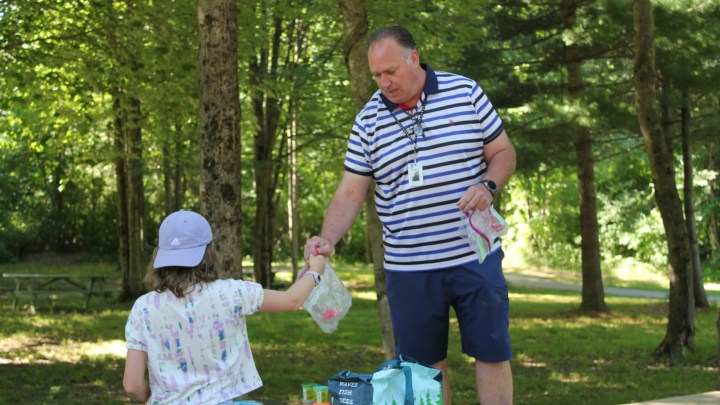 The sun is barely above the tree line as Chris Shea welcomes roughly 80 kids to a day camp organized by the YMCA of Auburn-Lewiston in central Maine, his voice bellowing through the trees.

Each day, the campers scatter across 93 acres of woods and fields, with enough space for all of the classic summer camp activities, from archery and swimming to a small ropes course.

Shea said it’s a valuable experience for a lot of kids. For around $175 a week, Shea said it’s a way to get them outdoors and socializing with new friends — something especially important after years of remote and hybrid schooling.

But even as he looks out at dozens of smiling faces, Shea said this summer’s camp can sometimes feel strangely empty.

“It’s almost like half the numbers you want to see in front of you as you give announcements,” Shea said. “So it’s a little discouraging and disappointing. But I guess it is what it is, and you do the best you can with what you’ve got.”

The Y anticipated around 120 kids here this summer, but Shea said the organization wound up limiting capacity to about 80 campers. Camps across the country are making similar decisions, as a shortage of counselors is forcing many to reduce capacity or close programs completely, significantly cutting the number of summer child care options for parents and families.

“I think it’s competition, for sure,” said Meagan Hamblett, the executive director of the YMCA Alliance of Northern New England.

Working at a camp involves substantial training and responsibility, Hamblett said, with pay generally around $15 an hour. With wages and benefits rising at other places, such as grocery stores, Hamblett said she’s seeing more young people head to those jobs instead.

“And so some of our camps are only at 50% full; some are not running,” she said. “We have some Ys who have multiple day camps, and some of them can’t even run because they don’t have enough staff.”

Those closures have left some parents scrambling. For years, Rita Boutaugh has sent her daughter to a day camp in Ellsworth, along Maine’s Downeast coast. But without enough staff this year, the program was canceled.

“It was a sickening feeling knowing that my child wasn’t going to have child care for the next couple of months, for summer,” Boutaugh said.

Boutaugh managed to find some short-term solutions, such as sending her daughter to other camps for a few weeks; her parents have also assisted her. But Boutaugh said that, on many days, she works overnight shifts at the local Shaw’s grocery store so she can still care for her daughter during the day.

“Like tonight, I’ll have to go in and work overnight,” Boutaugh said. “But tomorrow, we’ll spend the day together. So we’re all just compromising and just trying to make the best of it.”

Many camp directors said they’ve tried increasing pay and benefits, with little success. Some day camps are now looking at bringing in international students on J-1 visas, as they say the extra staff might be needed so they can provide child care for summers to come.

At the YMCA camp in Auburn, Director Chris Shea said that he spoke with a grandmother just that morning who was looking for care. Shea said that it’s hard to say no to families when so few other child care options exist.

“So it’s a little frustrating,” Shea said. “The grandmother I talked to this morning understood. The kids that we have out here, they’re loving it. They’re having a great time at camp. I just wish more could take advantage of it.”