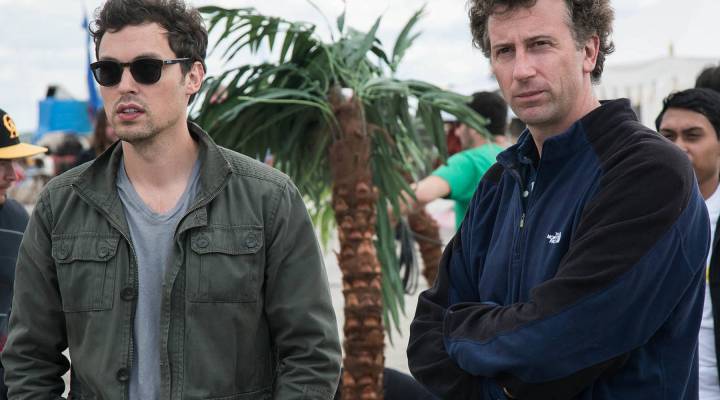 There’s yet another big-budget comic book movie in theaters this weekend, “Spider-man: Homecoming.” The movie, which is estimated to have cost studios $175 million to make, features a new Spidey played by actor Tom Holland.

Unlike previous movie iterations of the web-slinging superhero, Holland’s Peter Parker is younger and the story is way more “Ferris Bueller” than “Dark Knight.” It’s the take of two of the film’s writers, Jonathan Goldstein and John Francis Daley.

Marketplace’s Adriene Hill spoke with the writers about their film. Below is an edited transcript of their conversation.

Adriene Hill: So first question, John, why do we need a new Spider-Man?

John Francis Daley: Why? Well, because there has been an appetite for a different kind of superhero and that even pertains to the earlier versions of Spider-Man that people have seen. Unlike every other superhero that you see, this is one that is insecure, very much a teenager with all the angst that comes with it. And they just want to belong and he doesn’t figure everything out by the second act and become a brooding adult who has the weight of the world on his shoulders. He’s still a kid and he wants to take advantage of the fact that he has super powers.

Jonathan Goldstein: This was the first Marvel movie that kind of had to justify its existence in a way. Up till now they were usually breaking new ground, putting new actors in the roles. This was one that’s been done five times before in two different incarnations and so we came in feeling that sense of like — Okay, how can we reinvent this? What have we seen? Let’s make a checklist of all the things you’ve seen in all the other movies. And let’s not do those. Let’s not have him swing by web through Manhattan.

Daley:  Let’s not have him sits at the top of the Empire State Building thinking about how hard his life is.

Goldstein: Let’s not do Uncle Ben’s death because everybody knows. Yes, it’s a sad backstory but we don’t have to revisit it.

Hill: What was it like for you guys to sort of think back to your teenage angst-y years or were you perfectly cool?

Daley: Well, personally, I was on a show called “Freaks and Geeks,” that very much dealt with teen angst. And I was living through my character the angst that I felt growing up and also being the youngest cast member on the show and you know, how that made me an outcast even in the context of the high school show that I was filming so I could certainly tap into that and I still feel that now.

Hill: I noticed there are six credited writers on the movie. How did that work?

Daley: It’s very much on par with how Marvel operates a lot of the time. There are so many moving parts and there’s such a rush to get these movies produced because they slate them before they even make them, so they know when the movie’s coming out, it’s just a race to the finish line.

Hill: What is the timing of something like this? Talk me through the sort of the race to the finish line.

Goldstein: Well we came on —what was it two years ago? Almost exactly two years ago. And no script at that point. Nothing but some ideas. We got the job, we spent about six weeks in a room with Marvel executives and the director. There were already guys working on what they called “previs,” which is people sitting at computers basically and doing CGI mock-ups of what scenes will be like even before we’ve written them. They know we’re going to have a scene in a cargo plane so they start working. It’s a hugely collaborative effort so if you go into a thing like — it’s going to be my baby — you’re going to be disappointed it’s not going to be 100 percent anyone’s baby. There’s just too many moving parts.

Hill: There’s something else interesting about this project is you have two studios involved here, you have Sony, you have Marvel owned by Disney. How did that factor into the process?

Daley: It was a very copacetic relationship between the two of them. You know Sony had owned Spider-Man wholly up until this moment and they knew that it had to change just fundamentally and Marvel had proven themselves as being really good. I mean no one’s better than them and they know also what audiences want and what audiences are tired of. Sony had to relent and just kind of let them do their own thing. Which, I think, ultimately helped.

Hill: Were you guys “noted” to death because there were so many executives involved?

Goldstein: Yeah I think that you know everybody has pretty specific ideas of what they hope it will be. There’s a lot of cooks and you’re trying to please a lot of different kind of bosses.

Hill: And you guys have to think about merchandising too as you’re writing this? Is that something that’s a piece of this because it’s such an important part of the money side?

Goldstein: [Jokingly] Are you calling us sell-outs? What do you mean? This is a work of art.

Daley: We are on Marketplace.

Hill: You knew it was coming.

Daley: Yes. And it can be difficult to figure out a way to incorporate said merchandise into the product without it feeling you know, shill-y.

Goldstein: Sometimes it’s easy like the Audi. The Audi, the rich bully in school that’s driving an Audi or whatever. We knew we needed a sports car. We didn’t get anything for that.

Daley: No no no no. Maybe we will from this interview. But no there was — I won’t get into specifics of it because I don’t know, you know how much I can say, but there was a product that a company wanted to endorse through the movie that would be a toy. And we were asked if there was a way to incorporate that toy in very naturally as like a gadget that Peter Parker used. And it was tough and strange.

Hill: Did you do it?

Goldstein: I think we said no. I think we were like, hold the line. [Jokingly] And then they had the next writer do it.