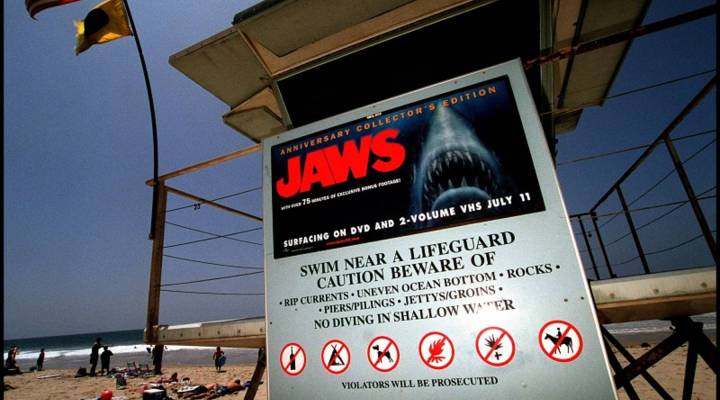 COPY
A poster advertising the anniversary collector's edition of the movie "Jaws" is posted on a lifeguard tower on Zuma Beach in Malibu, California, in 2000.  Photo by Dan Callister/Newsmakers
Brought to You By

A poster advertising the anniversary collector's edition of the movie "Jaws" is posted on a lifeguard tower on Zuma Beach in Malibu, California, in 2000.  Photo by Dan Callister/Newsmakers
Listen Now

Summer is the season when Hollywood relies on luring movie goers away from their small screens and into theaters. That’s usually done with a big movie involving a strong shot of action, a lot of special effects and a vast budget — like this summer’s “Spider-Man: Homecoming” or “Guardians of the Galaxy Vol. 2.”

But it hasn’t always been this way.

Jeanine Basinger, professor of film studies at Wesleyan University, began working in a movie theater in eighth grade. It was the late 1940s, the era of movie musicals like “On the Town” and “Annie Get Your Gun,” and she was an usher. She said 80 percent of Americans went to the movies once a week then, no matter the season — it was their main form of entertainment.

By the 1970s, movie-going had plummeted. Not even the air conditioning could draw crowds. TV was keeping people home. Summers were seen as a cinematic wasteland.

“Jaws” was set around a July Fourth holiday, and it was released just as moviegoers were about to celebrate theirs. It was a smash. Viewers went back to the theater to be terrified again and again.

“And all of a sudden people thought, ‘Wait, we can re-think this,’ ” Basinger said. “ ‘We can put a big, exciting draw, a movie that needs to be on the big screen, in the summer.”

A couple of summers later, “Star Wars” was released and became a worldwide hit – and people kept coming back to the theaters to see it.

“It was kids in particular that drove the repeat viewings that knocked up the box office,” said Tom Shone, author of “Blockbuster: How Hollywood Learned to Stop Worrying and Love the Summer.”

There were no videos, no DVDs. The only way you could relive the experience was by going back to the theater.

“I mean, I can speak as someone who kind of went back and saw it as many times as I could. It was just a compulsion,” Shone said.

In the late ’70s a “blockbuster” was any movie that had people lining up around the block. It was “Star Wars,” but it could also be a more sober film, like “Kramer vs. Kramer.”

These days, “a blockbuster has come to mean a very different kind of movie, one aimed at the younger market with a lot of special effects, spectacle, costing a lot of money, and it’s conceived as such,” Shone said.

Because summer blockbusters can be so expensive to make and market, reaching the U.S. market is no longer enough for a movie.

“It has to appeal to a huge global audience,” said Jason Squire, editor of “The Movie Business Book.” “That’s a very big change and a serious roll of the dice.” But, Squire said, Hollywood is willing to take the risk, because when the rewards are good, they’re enormous.

Film studies professor Basinger said she wishes Hollywood would roll the dice in a different way.