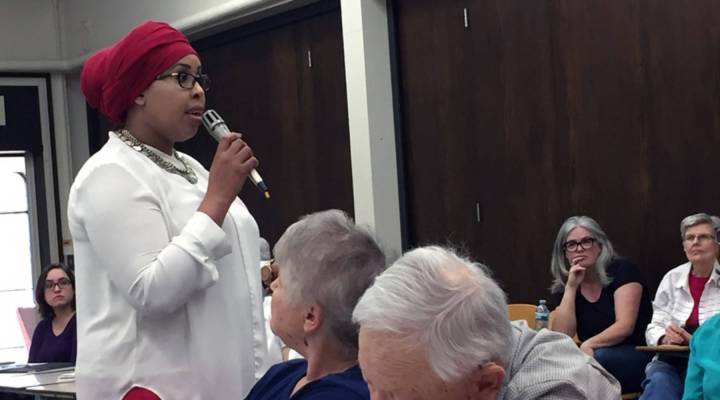 “Somali Lives and Culture,” a four-week course open to anyone, wrapped up recently on the campus of the College of Saint Benedict, a Catholic college in Central Minnesota, near the town of St. Cloud. It drew about 40 people. The teacher, Hudda Ibrahim, is a Somali-born college instructor and author. Her book “From Somalia to Snow: How Central Minnesota Became Home to Somalis” served as the course material.

Ibrahim is tall, wears glasses, a chunky gold necklace and a head covering, as many Muslim women do. She told the class she gets a lot of questions about it.

Somalia is one of the six Muslim-majority countries included in President Trump’s travel ban, which remains in court limbo. After several federal courts have held the travel ban unconstitutional, Trump has asked the Supreme Court to take up the case. Meanwhile, visas are being granted less often for people from the six Muslim-majority countries cited in the executive order. Also, State Department data show refugee resettlements are lower this spring.

Many of the thousands of refugees and migrants from the war-torn country of Somalia wind up in Minnesota. It has the greatest concentration of refugees from there in the U.S., and that includes not just the Twin Cities area, but more rural parts, like the St. Cloud area where Ibrahim lives.

When Ibrahim moved to St. Cloud a decade ago to be near her brothers, she said there were only a few Somali families around. But those became magnets for others. And there was work in the poultry processing and manufacturing plants in and around St. Cloud.

The town was once nicknamed “White Cloud” because it had hardly any diversity. Now an estimated 10,000 Somalis live in the area.

Integration has been difficult at times. Somali kids have walked out of school over bullying. Last year, someone wrapped pig intestines around the doorknob of a local halal grocery store — Muslims don’t eat pork. And when a Somali-born man stabbed a number of people at the town’s shopping mall last year, that increased calls to restrict refugees.

Ibrahim said she’s experienced hostility herself. Comments about her head covering have not always been innocent.

“Someone said to me once, “Why are you covered? You shouldn’t be wearing that. You should go back to Somalia,’” she recalled. “So I would say, ‘With all due respect, I came here when I was 19, I went to school here, I make sure I speak the language, I have a job, I obey the law, I pay taxes. What else do you really want me to do?’”

Vincent DeVargas wants to change those attitudes about the Somali refugees he refers to as “the new Americans.” He helped organize the “Somali Lives and Culture” class.

There are economic reasons for embracing the refugees, according to Gail Cruikshank. She connects job seekers and employers through the Greater St. Cloud Talent Development Corp.

“In the St. Cloud area, the growth for us is strictly coming from our immigrant population,” she said.

Cruikshank helps employers who hire refugee workers with information on how to deal with language barriers or how to accommodate prayer breaks on a production line.

Somali workers’ median household income in the state is low — in the range of $20,000 a year. Few have bachelor’s degrees. But some economists say they’re doing low-skill work employers need. The St. Cloud area’s job vacancy rate, a measure of labor demand, was 3.8 percent in the fourth quarter of 2016, higher than the statewide rate of 3.6 percent.

“Our employers know this is the population they need to blend into their workforce if they’re going to continue to grow,” Cruikshank said.

Ibrahim also works with employers on these issues through a consulting business she founded. Her business partner, Abdi Mahad, said it’s not just about white St. Cloud folks learning about Somalis. Mahad said the Somali business owners need to make an effort, too.

“If you go to a Somali restaurant, any restaurant in this city, they don’t have a menu at all,” he said. “So someone who is not Somali, ordering food is not something easy. You don’t know ingredients. Now we are working on that.”

Mahad and Ibrahim said integration means accommodation on both sides.