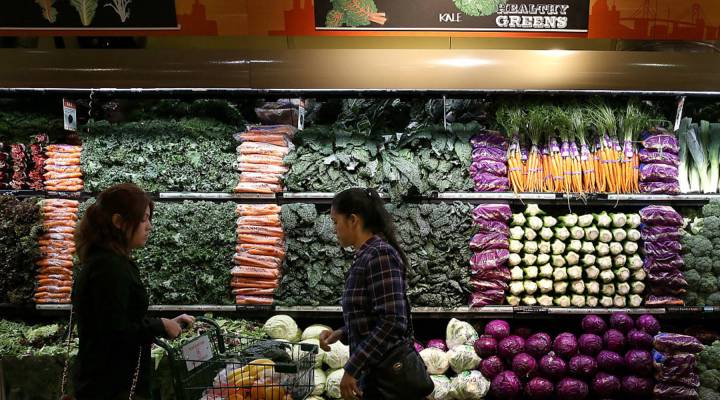 In a move that will reshape the supermarket business, the online retailer Amazon has announced it’s buying the high-end food chain Whole Foods in a deal worth $13.7 billion. That comes out to about $42 a share.

“Millions of people love Whole Foods Market because they offer the best natural and organic foods, and they make it fun to eat healthy,” Amazon CEO Jeff Bezos said in a statement.

But Whole Foods has also alienated customers with its high prices, with activist investors pushing for change.

Analysts are already imagining the possibilities: Amazon has access to all those physical Whole Foods locations while Whole Foods (which is keeping CEO John Mackey and its name) has access to Amazon’s tech and logistical smarts.

Amazon has been trying to dip its toes into grocery sales for years. It already has the delivery service Amazon Fresh, and physical convenience stores called Amazon Go, which allow shoppers to buy items without waiting in checkout lines. Customers are charged for these products electronically as they take them off of the shelves.

Additionally, Amazon has experimented with lockers for picking up orders. All of these are hints of what Amazon might bring to Whole Foods. The company reportedly considered buying Whole Foods last fall. But speculation about who would take over the brand amid its declining sales mainly included brick-and-mortar companies like Target and Albertsons.

The competition is already probably experiencing a lot of unease right now. Stocks for companies like Wal-Mart, Target and Kroger dipped on Friday morning.

These changes will happen in an industry that isn’t exactly known for change.

“[The supermarket industry] is glacially slow. In the last 65 years or so, the only really major change is products,” Low said.  “There’s a lot more stuff in markets than there used to be, but the way they manage the business — from logistics to sales — really hasn’t changed in half a century.”

Whole Foods has received a lot of pressure from key investors, resulting in a shake-up in management. In early May, the company hired a new chairwoman, Gabrielle Sulzberger, and axed five of its board members, or nearly half of the board.

Now they’re clearly facing another big leadership change with Amazon — which has a reputation for having both innovative and harsh working conditions.

“It’s an absolute homerun because you’re replacing the management system entirely with Amazon’s management, which is one of the best in the world,” Low said.

While we don’t exactly know what Amazon’s plan for the grocery chain will be, know that there probably is a plan in place, Low added. The folks at Amazon are long-term thinkers.

“People who used to say Amazon couldn’t be profitable because they were just a bookstore might want to think before they suggest Amazon can’t make money with Whole Foods because it’s just a grocery store,” Low said.

Janet Nguyen and Jed Kim contributed to this report.