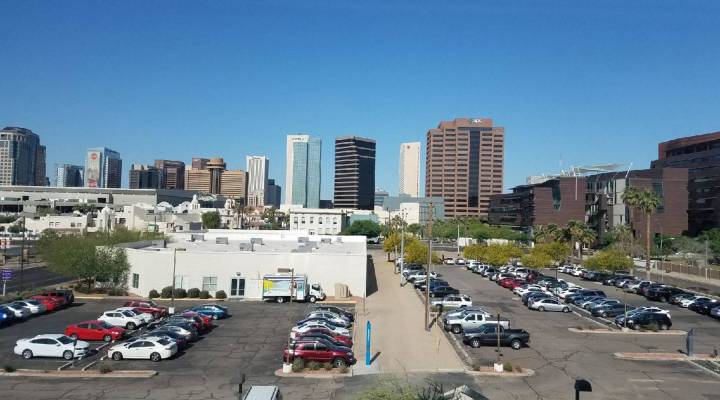 As part of our series looking at aspiring and emerging tech hubs, we visited Phoenix, the “Silicon Desert.” It’s home to a growing startup scene, testing sites for self-driving cars and many young entrepreneurs pitching themselves as the next big thing. The city has a lot of potential, but how does it compare to Boston, New York — or even San Francisco? To find out, we focused on three important ingredients that cities need to be considered a tech hub: culture, talent and capital.

Our first stop was Tuft & Needle, a startup that uses software and data analytics to make mattresses and pillows. We met co-founder JT Marino at the company’s newly remodeled headquarters in downtown Phoenix. He praised the tech scene in Phoenix.

“There’s companies moving here, and there are really great companies that are headquartered here,” he said. “The entrepreneurial community is thriving.”

Marino credits the boom in the local tech scene to a couple of things, like the low cost of living, which he believes gives Phoenix a competitive edge.

“They’re not thinking to themselves, ‘I want to join a company, get some equity, let it vest and then move on to the next thing,’” he said. “People want to be a part of something that enriches their lives.”

Marino might be right about employee culture in Phoenix: Tuft & Needle employs over 150 people with little turnover compared to its competitors in other big tech hubs.

Next up on our visit: Arizona State University, which, through its focus on entrepreneurship, is helping shape the city’s talent pool.

We sat in on an entrepreneurship class where groups of students energetically pitched their ideas for apps: potential solutions for meeting study partners in classes, improving video game storage and getting access to cheaper groceries.

Brent Sebold, director of entrepreneurship at the school, thinks these students are the future of Phoenix’s tech community.

“We are building a process to develop entrepreneurs of all stripes, of all developmental stages, at scale,” he said. “If we do this right, we could be onto something very big here.”

One of Sebold’s students, junior Faiz Khan, was also hopeful.

“I’m from Silicon Valley, so [startup culture] is obviously pretty big there,” he told us. “Coming here and seeing people develop technologies and new things, it’s kind of like seeing another Silicon Valley develop in Phoenix.”

So it seems like Phoenix may have the culture and the talent to become a major player in the tech scene, but is there money to fund new companies? We met with venture capitalist Zach Ferres, who leads Coplex, a startup accelerator.

He said Phoenix’s technology sector is thriving thanks to the city’s unique strengths, like a low cost of living, high quality of life and the right kind of people. And the ingredient we’re looking for — money.

“There’s plenty of capital here, which a lot of people will argue with me to the death on this,” Ferres said. “We were able to start our fund here. We have a $5 million accelerator fund.”

But Ferres brought up something he thinks is missing in Phoenix.

“When you go to LA, and Denver, and Seattle, and Austin, the things that separate them from us is that there are a lot more mentors that have built and sold tech companies that re-engage in the ecosystem,” Ferres said. “So they come, they mentor, they invest, they start funds. And up until about three years ago here, that was entirely nonexistent.”

So Phoenix needs a success story to create more success stories. Can it be done? Ferres is optimistic.

“I think it’s going to be a great startup technology ecosystem here,” he said. “The sky is the limit.”