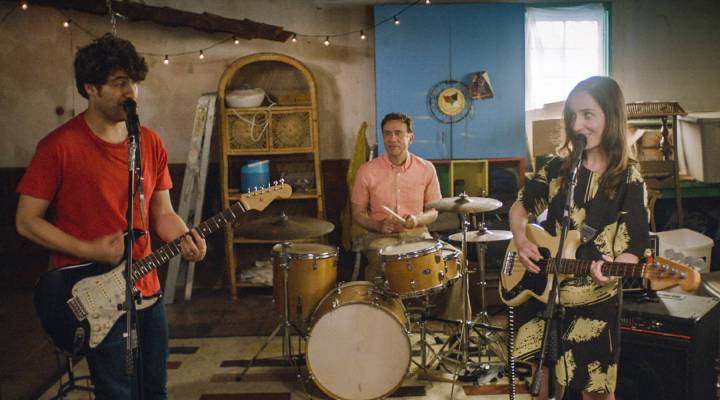 Actress Zoe Lister-Jones is famous for her role in CBS’ “Life in Pieces,” but she’s making her directorial debut with the independent film “Band-Aid.” Lister-Jones wrote, directed, produced and stars in the film, which centers on a married couple who turn their fights into songs. Adam Pally stars as Lister-Jones’ husband and Fred Armisen plays an odd neighbor who becomes the band’s drummer.

Lister-Jones, who was once in a touring band when she lived in New York, said her own experiences helped inspire the concept.

I think I’ve always been interested in the inner-workings of long-term relationships. I’m a child of divorce, so those themes have always been something that have kind of confounded me — why couples choose to stay together and how they do that. I also love writing songs, and I knew that I wanted to find a story that had music at its center, so it was sort of the convergence of those two things that led to a couple that fights through songs.

The film was also a chance for Lister-Jones to take creative control of a project. Though she’s written three previous films with her husband, filmmaker Daryl Wein (“Breaking Upwards,” “Lola Versus” and “Consumed“), Lister-Jones said wearing all the hats on “Band Aid” allowed her to experiment in ways she hadn’t before. One of those experiments was hiring an all-female crew — everyone from the director of photography to the grips were women.

In my experiences, both in front of the camera and behind it, I have become very aware of the underrepresentation of women on film and TV crews. I think on top of that, I have also found that in my own life, something inexplicably magical happens when women come together, and I wanted to see what it would feel like if women came together and made art. I could get the best of both worlds and have this creative social experiment but also offer opportunities to women in departments where they’re rarely given that.

The annual Women in Independent Film report shows that men held 72 percent of key behind-the-scenes roles in independent films last year, a recent historic high. So what does an all-female crew feel like?

The energy was markedly different from any set I had ever been on, and every actor that came on set would immediately remark that this was something really different and amazing. It was a very nurturing and supportive and communicative set, but it was also highly efficient, so it was the best of all the worlds. Not only were we all really taking ownership over the work, but everyone was so anticipatory of what anyone else might need at any moment in the way that many women can be. I found it remarkable.

Lister-Jones said that behind the cameras, the film industry suffers from the same diversity pipeline issues as Silicon Valley or the financial sector.

I think the system is broken, and there’s been a lot more discourse around gender inequities in our industry, but I don’t see enough action being taken. It’s about understanding that the risk that might be taken in hiring someone, that might have less experience or who you might have never worked with before is sort of imperative right now.