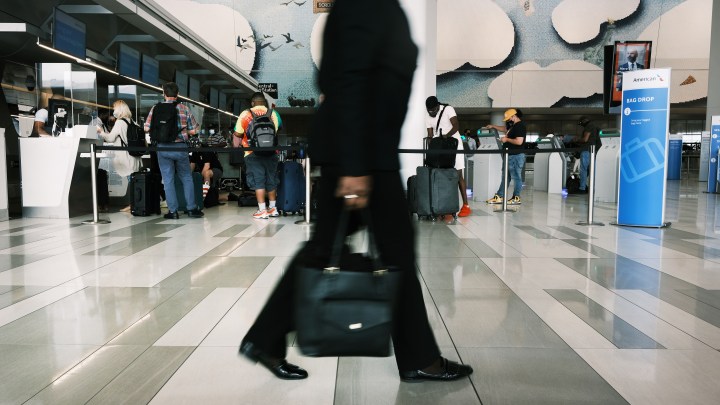 COPY
Business travel has not rebounded in the ways that personal travel has. And with the spread of coronavirus delta variant, it may be long to recover. Spencer Platt via Getty Images

Business travel has not rebounded in the ways that personal travel has. And with the spread of coronavirus delta variant, it may be long to recover. Spencer Platt via Getty Images
Listen Now

Aug. 1 was the single busiest travel day for commercial aviation since the pandemic started — more than 2.2 million people went through Transportation Security Administration checkpoints. It’s been over 2 million people for five days in a row, the longest that streak’s been since February of last year.

Most of that travel is still within the United States, and most of it’s personal. Business travel, on the other hand, has been a lot slower to recover, and it may take a long time to bounce back.

Airlines make a lot of their money on business travelers. That’s because “you have people who are booking last-minute fares. They’re less price-sensitive, the companies are paying for it,” said David Slotnick with the travel site The Points Guy.

But between April and June, companies were only spending about 10% or 15% of what they used to on travel before the pandemic, according to a new report from Deloitte.

The travel that has come back revolves mostly around client visits, said Anthony Jackson, who worked on the report.

“Doing a new sale, building a relationship … project work that requires being on-site, those are really the kind of key activities that companies are viewing and understanding are really important to do in person,” he said.

But things like internal company meetings and trainings? Those aren’t really happening yet. That kind of travel might never be as common again, according to Kate Lister at Global Workplace Analytics.

“What we’ve learned is that good enough is good enough. It may not be as good to have a virtual meeting, but it gets you 70%, 80%, sometimes 90% of the way there,” Lister said.

Plus, many companies have been saving money by holding back on business travel.

Meanwhile, there’s the delta variant of the coronavirus. COVID-19 cases are rising again, and many offices are still closed.

And international travel, which is particularly lucrative for airlines, is still heavily restricted, said Suzanne Neufang at the Global Business Travel Association.

“[The] U.S. is not allowing, at this point, non-American or green card holders into this country. So a lot of the suppression is some of the U.S. policy itself,” she said.

Until more of the world has access to vaccines, business travel won’t fully recover, Neufang added.