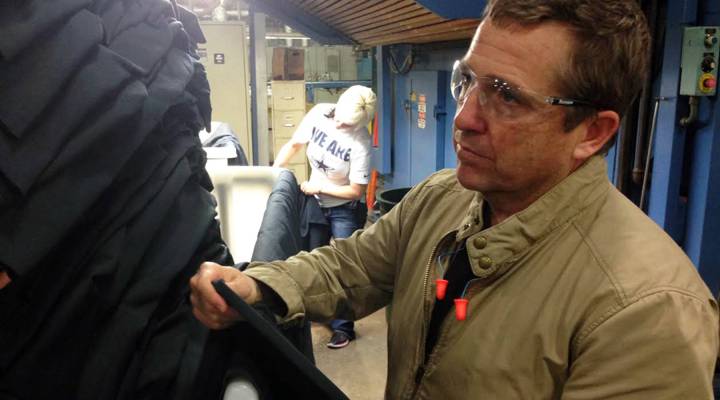 Part of President Trump’s appeal is his pledge to bring jobs back to America. Well, there’s a San Francisco apparel CEO who has tried his luck both ways — manufacturing abroad and in the U.S.

Today, the company he oversees, American Giant, emphasizes that everything in its clothing line is made domestically. That process starts with cotton grown and spun into yarn in the Carolinas.

The head of American Giant, Bayard Winthrop, makes frequent stops during the year to see his product being made. On a recent visit to Carolina Cotton Works in Gaffney, South Carolina, he looked on as heavy cotton cloth for his line of hoodies and sweat pants rolled off a conveyor belt.

The fabric had just been washed and dried and was ready to head to the cutters and sewers.

Winthrop has run several other business ventures, including those with products that were made mostly in China. For his American Giant line of clothing, he travels back and forth between North and South Carolina to check on various production elements.

His sources for cotton and yarn are domestic, and the company’s dying and sewing work is also done in the U.S. Winthrop said this gives him a more “hands on” view of his apparel business, so he can pay attention to the smallest detail.

“I think we have taken maybe a different approach to new product, and that we have a pretty narrow, pretty focused line,” Winthrop said.

That “focused line” means the company makes only casual cotton clothes in mostly solid colors that are sold only online, with a lifetime guarantee — and a higher price tag than your average chain store T-shirts and sweat pants.

“And so each one of the pieces that we put out into the market, it’s almost like letting go of a child,” he said.

American Giant, which started in 2011, has embraced the rebirth of the “Made in America” movement. Trevor Little, an apparel technology management expert at North Carolina State University’s College of Textiles, has seen success come from the model American Giant is using.

“American Giant is really smart, because they’re looking at the whole cost and then being able to make smaller quantities and deliver it quickly to the consumer,” Little said.

Still, Little said the marketplace is very competitive. Most apparel sold in the U.S. is made overseas.

“Amazon has now got its own line of products to compete with brands that are already on Amazon,” Little said. “And so the competition, the business competition side is dynamic, is always changing, whatever that customer wants.”

And on Amazon, you can find a wide variety of hoodies, some for $10 or $15. American Giant is betting that shoppers will continue to order its $89 classic full-zip cotton men’s hoodie.

Dozens of women pack a small manufacturing plant in Middlesex, North Carolina, to make those hoodies. Manufacturing in the U.S. hasn’t only been good for American Giant, it’s been good for companies like Eagle Sportswear.

The workforce at Eagle Sportswear has almost doubled since it started sewing American Giant apparel, from 98 to nearly 200 workers.

Brian Morrell, general manager at Eagle Sportswear, said he didn’t want to make the American Giant line at first — too costly, too much needle work. He eventually changed his mind. But he continues to try and cut down on the amount of time it takes to make each hoodie.

“We’ve increased efficiencies and changed some engineering, and we’re down below the 43 minute area,” said Morrell. “It’s still a lot of time when you’re looking at your regular hoodie that you buy at a store.”

And that’s the U.S. manufacturing dilemma — figuring out how to make the best product in the least amount of time for an ever-changing consumer.