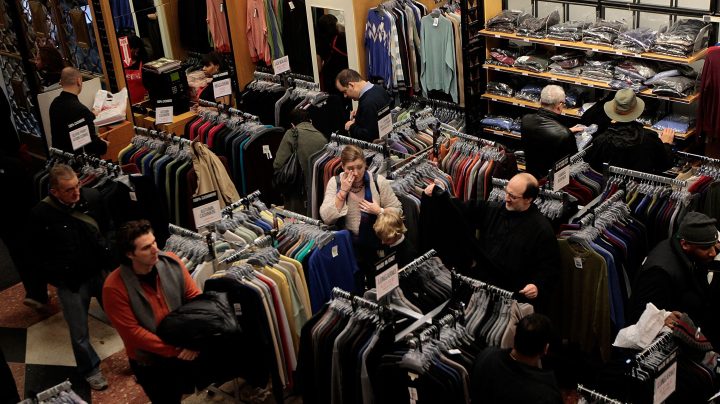 Shoppers browse through racks of clothing at a department store in 2010 in New York City. Chris Hondros/Getty Images
Listen Now

The following is an excerpt from Dana Thomas’ “Fashionopolis: The Price of Fast Fashion and Future of Clothes,” a new book that investigates the state of the fashion industry and explores the people and companies trying to make its future more sustainable and equitable. One such company could change the way we shop for clothing all together.

In 2007, Amazon head Jeff Bezos reportedly told his employees, “In order to become a $200 billion company, we’ve got to learn how to sell clothes and food.”

Exactly ten years later, he did both by acquiring the Whole Foods Market chain and launching Amazon Fashion. Yes, its clothing rubric includes unsexy staples such as socks and underwear. But there were also its new pri­vate fashion labels, like the Zara-esque Lark & Ro, and household names such as Calvin Klein, Tommy Hilfiger, and Theory. By the end of 2017, Amazon reported $175 billion in revenue, and the following year was ex­pected to cross the $200 billion threshold. And, with projected sales of $30 billion in clothing and footwear in 2018, it was poised to overtake Walmart and Macy’s and become America’s number one apparel retailer.

[Robert] Burke, who has consulted for Amazon, said the e‑tailer plans to offer a hun­dred private fashion labels. Analysts predict that Amazon could be ringing up $45 to $85 billion a year in apparel sales by 2020 and possess 16 percent of the American apparel market by 2021.

In 2017, Amazon secured a pat­ent for an on-demand, automated apparel factory.

To help it get there, Amazon hired Christine Beauchamp, the sunny blond former chief executive of Victoria’s Secret Beauty and global brand president of Ralph Lauren’s Lauren and Chaps divisions, as president of its fashion division.

Under her command, Amazon introduced in June 2018 a gadget called Echo Look: a hands-free camera and artificial intelligence personal stylist, retailing for $199. It’s like having your own Mews sales assistant, but at home. Echo Look connects to Amazon’s virtual assistant, Alexa; takes full- length pictures or six-second videos of you in your clothes; and builds a library of looks, which you can sort by season, style, color, or dressiness. The Style Check feature compares images of you in different outfits— like those “Who Wore It Better” magazine features— and tells you, on the screen, with the side‑by‑side shots, what’s working, and what’s not, sans the snark. “Fit looks better.” “The shape of the outfit works better.” “Colors look better on you.”

Amazon also began to offer its one hundred million Amazon Prime mem­bers a try-before-you-buy service called Prime Wardrobe. (Research by Morgan Stanley shows that Prime members are twice as likely to buy fashion from the site than non-Prime members.) As with the fashion retail start‑up Stitch Fix, Prime Wardrobe allows you to select a boxful of clothes, shoes, and accessories, have it delivered, and try everything in the privacy of your home. Whatever doesn’t suit you can be sent back for free; what you keep, you purchase. As in other industries it has dominated in the past, Amazon’s myriad of initiatives has left its peers in awe. “They’re going to be massive in apparel,” Levi’s Chip Bergh said.

And here’s why: “they want to own the brands and own the sourcing,” Robert Burke explained to me. To that end, in 2017, Amazon secured a pat­ent for an on‑demand, automated apparel factory—meaning, like Unmade, it would produce clothes only after purchases are completed. In the patent application, Amazon declared its computerized system would provide “new ways to increase efficiency in apparel manufacturing.” Fabric would be printed, cut, and sewed by a wholly automated on‑site system, with cameras following the process, like a robot manager. An “image analyzer” would signal when something goes awry—the fabric gets caught in a machine, something is cut crooked—and call on a human to intervene and straighten out the situation. Fittings of finished garments would be photographed, and necessary alterations would be programmed into the production process.

“Imagine if Amazon had the body dimensions of 100 million customers,” consultant and former Amazon manager James Thomson told the Financial Times. “Amazon doesn’t replicate other people’s business. They find a cheaper way to do it at a mass scale, and catch everyone going, ‘What just happened?’ ”

From “Fashionopolis: The Price of Fast Fashion and the Future of Clothes.” Published by arrangement with Penguin Press, a member of Penguin Random House LLC. Copyright © 2019 by Dana Thomas.