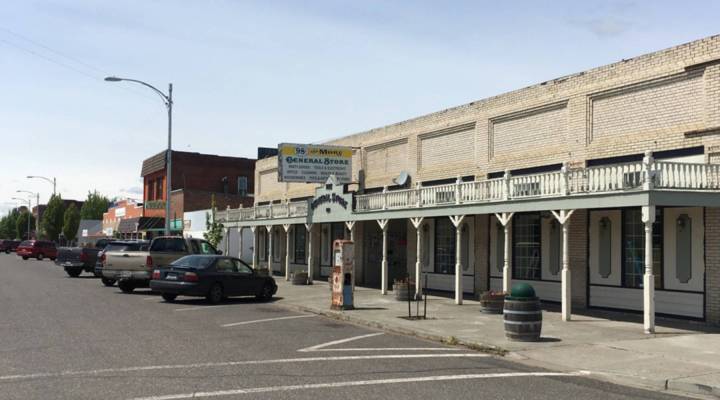 COPY
Goldendale, Washington, population 3,400, could be impacted by cuts to agriculture, environmental and other federal programs in President Trump's proposed 2018 budget. Mitchell Hartman/Marketplace

The Trump administration’s proposed 2018 budget calls for deep cuts in non-defense discretionary spending, including a 21 percent reduction for the U.S. Department of Agriculture.  And the town of Goldendale, Washington, population 3,400, is one of many rural communities that could see those budget cuts at USDA and other federal agencies, such as the Environmental Protection Agency, the Interior Department and the U.S. Army Corps of Engineers, play out at the local level.

These agencies are deeply involved in rural life and economics in America, managing vast federal lands across the West, as well as rivers and streams, mining and energy development, air quality, fire suppression and hydropower.

Goldendale is on the high, dry prairie east of the Cascade Mountains, surrounded by farms and ranches. Like many small towns, the downtown is struggling, with boarded-up storefronts sporting “For Lease” signs next to long-established shops and restaurants.

Jeanne Morgan has run Golden Photo Services on Main Street for nine years. She said the mid-2000s recession hit hard, but the economy is improving now. And she’s not concerned about possible cuts to federal employment and spending in Klickitat County and the surrounding area.

“The jobs that are here are jobs that have been here, mainly from the county and the state, and not so much money flowing in from the national coffers,” Morgan said. “So it doesn’t really affect us, I don’t think.”

On the outskirts of town is one of the government offices that could be impacted by budget cuts. The Farm Service Agency in Goldendale administers farm subsidy, disaster relief, conservation and other programs for the U.S. Department of Agriculture.

County Executive Director Tomy Gertsch said some of the USDA employees in her office live on nearby farms and depend on a steady government income and benefits.

“One family member will have the farm, the other will work in the office and keep up on policy, keep an eye out for the family,” Gertsch said. “I know they do get concerned when they hear things about the budget. So many things could happen — all we can do is go along and just wait.”

Approximately 1.5 percent of jobs in Klickitat County are federal, about the same percentage as in urban areas such as Seattle and Portland. But in some rural counties in Oregon and Washington, 10 percent to 20 percent of jobs are federal. Funding from federal programs supports additional jobs in state and local government.

“There definitely is a higher dependence on government in rural areas compared to urban ones,” said Damon Runberg, the state employment economist for Central Oregon, based in Bend. “They’ve been fairly consistent employers, the local government side — the school districts and local administration, or we’re looking at the federal side, with the Forest Service and BLM.”

The president proposes reducing farm subsidies by billions of dollars over the next decade and eliminating several USDA programs, including the Rural Business-Cooperative Service, the McGovern-Dole International Food for Education program and the Rural Water and Waste program. Spending would be cut for rural development and housing assistance, conservation and land acquisition by the U.S. Forest Service.

Secretary of Agriculture Sonny Perdue released a video message about the budget to USDA employees, in which he said: “There’s no denying such budgetary restrictions could possibly mean a reduction in staff. We’ll be looking at options to achieve those savings, through normal attrition, early retirements, or other least disruptive means.”

Runberg said deep federal budget cuts could weaken rural employment, which has not fully recovered since the recession, and could also negatively impact “critical services that those workers provide: firefighting, resources to the agriculture industry, hydropower.”

Neal Slater is a third-generation rancher in Goldendale and a strong Donald Trump supporter. He’s been pleased with the new administration’s pledges to renegotiate trade deals and get rid of environmental regulations that he said interfere with local farming and ranching.

He also has strong praise for the local USDA Farm Service Agency, which has helped him get funding to drill new wells, making his ranch more profitable.

But still, he said this about possible cuts to USDA: “I don’t think cuts are a bad thing. I think there’ll probably be more benefit than adverse. Because you take some of these counties where they can’t log on federal lands. Counties have gone broke. So, you get back to managing the forest and managing the land, you’re going to see some of these revitalized and come back to life.”

At the USDA office, Gertsch, who grew up in a small farm town just across the Columbia River in Oregon, said she’s aware that many local people want to see the federal presence downsized to reduce regulations and the cost of government.

When she introduces herself to someone new, she said she keeps a low profile.

“I might wait a little bit until I know what their feelings are,” she said. “If they do have issues with the government, at least I can be there to answer questions and smooth things over.”