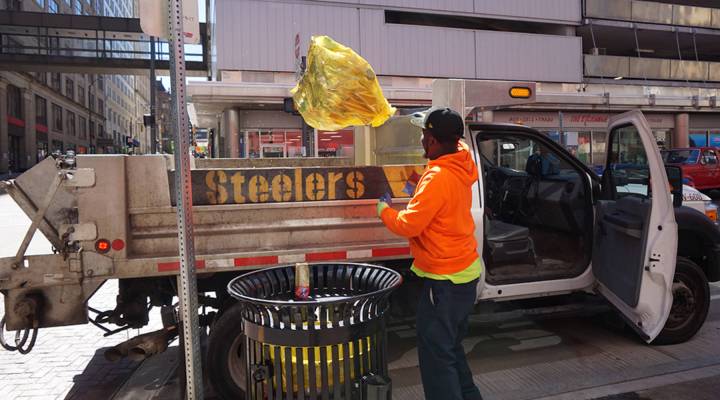 It’s a Monday morning and Val Trinkala and Robert Sledge are slowly making their way along Pittsburgh’s downtown streets, stopping to check public trash cans in a Department of Public Works truck. About half the cans need emptying; the rest they skip. But they still check every can on every street on their route.

This time next year, a ride with these guys will look pretty different. Pittsburgh is spending $854,000 to install sensors in street-side trash cans. Those sensors will transmit information that tells workers when the cans are full to reduce time they spend checking empty cans.

“If we are able to knock off 50,000 hours, that’s roughly 25 employees that can be rededicated to other tasks in public works,” said Mike Gable, director of public works. He said they can then do things like “pothole patching, vacant lot cleanup, it could be more tree pruning, street cleaning.”

Gable expects this upfront money will turn into savings down the line. Sara Bixby, with the Solid Waste Association of North America, has seen variations of this type of technology in trash.

It’s what’s called the internet of things — merging the physical with data to collect information. Carlo Ratti with Senseable City Lab at the Massachusetts Institute of Technology said this information can make cities run better. In Cambridge, his lab installed sensors on trash trucks.

“By actually using a small number of trucks, Cambridge has learned a lot of things about the city,” he said, citing data about air quality, temperature, potholes and infrastructure. He points to similar projects in Copenhagen and Singapore. “I would say we’re at the beginning of this internet of things revolution in cities. And I think we need to experiment a lot,” he said.

Back in the Department of Public Works truck, Trinkala, who’s in the Teamsters union, said this experiment will waste tax dollars.

“There’s no need to get sensors and invest all that money to tell us what we’re doing right now. That’s not a good business decision,” he said.

He’s been emptying cans for 37 years. Even if they’re not full, he said the cans should still be emptied at least once a day. Food waste attracts rats. And the biggest concern, he said, is discarded needles.

While city officials expect a return on their investment within a few years, workers like Trinkala feel differently. At the dumping site, he points to a pile of dented, rusted trash receptacles. Snow, ice, salt, vandalism — those are the realities of street cans he said, not fancy cans with sensors that cost $1,200 apiece.

“They’re going to be scrapped in three years. Just by the weather, environment. By age — everybody, everything gets old. Things need [to be] repaired,” he said.

The sensors will be installed throughout the city over the next year.