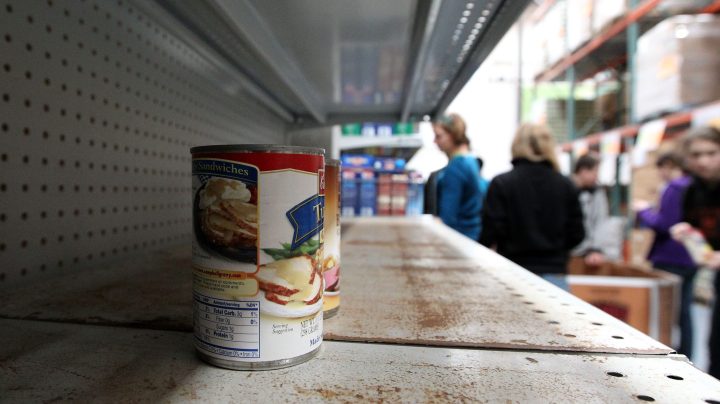 A shelf almost bare of canned food. With Americans stocking up on food for future needs, supplies of containers are running low. Justin Sullivan/Getty Images

A shelf almost bare of canned food. With Americans stocking up on food for future needs, supplies of containers are running low. Justin Sullivan/Getty Images

In the modern world of low-inventory manufacturing, an unexpected spike in demand has brought critical shortages in COVID-19 test kits, ventilators and now cans for food. Wholesale manufacturers and distributors are running out of empty cans to pack nonperishable foods that so many Americans are buying in bulk.

“Especially in ready-to-eat meals, like chili, soups and prepared meats,” said James Kwon, CEO of technology and logistics firm ePallet. “The cans are in short supply.”

Specifically, raw materials like steel and tin from China are scarce, as are made-in-China labels that go on food cans. Kwon said one food manufacturer had labels sent over by plane instead of ship to get them quickly. Still, canned items that normally may be unavailable for just a week or two are now delayed for months, presenting challenges to at-risk populations that depend on canned food.

“Senior citizens, schoolkids who are requiring these emergency food packs and the newly unemployed,” Kwon said. “Waiting a month to three months is just unrealistic.”

And as the pandemic worsens, surveys suggest demand for nonperishable food is spiking again. The analytics firm IRI says overall grocery store purchases are up 13% over last year, but soup sales are 25% higher.

“I would not associate with the peak of summer to be when people would be purchasing things like condensed soup or canned chili,” said Joan Driggs, IRI vice president. “But the sales levels for those products are up significantly.”

Still, from a business perspective, it may not make sense for soup and can companies to invest large amounts of money to boost production, given things may return to normal in perhaps a year.

“We all want it to go back to the way it was,” said Rudi Leuschner, supply-chain management professor at Rutgers University. “I also don’t think that when this is all over that people are going to keep hoarding weeks of food in their house.”