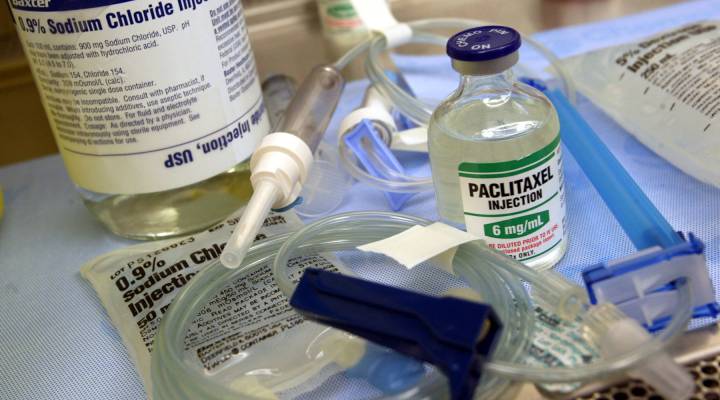 COPY
Advocate David Mitchell says drugs are so expensive that some people are losing their homes or using college savings. Above, chemotherapy drugs. Chris Hondros/Getty Images

David Mitchell loves to sing. He thought he may spend his retirement with the National Philharmonic chorale. Or maybe head back to school to become a professor.

Ultimately, Mitchell decided to use his voice differently.

He’s started a national organization, Patients for Affordable Drugs, to channel the public’s growing frustration about high drug prices and campaign to make them more affordable.

What makes his organization different to others is that it doesn’t take any funding from drug companies. That’s significant because most patient advocacy groups do.

University of Pennsylvania researcher Matthew McCoy co-authored a separate report that showed drug and medical device companies cut checks to more than 80 percent of the largest advocacy groups in the country.

“People have rightly raised questions, ‘Well, [patient groups] can’t really speak out, because if they do that, that might jeopardize funding that they depend on.'”

No one definitively knows if this money influences patients and their advocates to line up with industry. What we do know is drugmakers are using patients’ often very real and very desperate stories to help them get pro-industry laws through Congress.

By monopolizing patients’ voices like this, Mitchell said it’s near impossible to hear the other voice out there — the one insisting that high prices are hurting many Americans.

“Patients all over this country are struggling,” he said.

“They are losing their homes, they are dipping into their kids’ college funds. They are sometimes not taking their drugs. Or they are cutting their pills in half.”

David Mitchell rests after receiving chemotherapy; $40,000 worth of drugs flow through him each month.

One in five Americans report not filling a prescription because it’s too expensive.

Even seniors who are covered by Medicare face out-of-pocket costs as high as $12,000 if they have conditions like multiple sclerosis or cancer.

To get the story out about the impact of high drug prices, Mitchell is borrowing a page from drugmakers and raising up the volume on patient stories, including his own.

In March, he testified in front of Congress at a hearing on drug prices.

“I’m a relapsed cancer patient with multiple myeloma. It’s an incurable blood disease. Drugs are keeping me alive,” he told the committee. Forty thousand dollars’ worth of drugs run through Mitchell’s body every month.

“If you saw the X-rays…. I looked at them once, and I will never look at them again. Because I have holes in my skull and in my arm bones and my pelvis,” he said.

Sometimes Mitchell catches himself, rubbing his arms, checking to see if his bones are still solid. But that day in Washington, Mitchell told the Committee he’s lucky. Between Medicare and savings, he and his wife, Nicole, can handle whatever costs come their way. Many can’t.

It struck a chord with Maryland Democrat Rep. Elijah Cummings.

“Mr. Mitchell, I’m going to make sure that President Trump hears your testimony,” he said.

“That’s the power of being a patient,” Mitchell said.

Just nine weeks in, it seems like his latest campaign is shaping up. Patients for Affordable Drugs already has gathered stories from 4,600 people. The group is mobilizing people to support legislation at the federal and state level, join conferences and testify.

For Mitchell, though, this is more than just taking on the industry; for him, it’s being part of something — and a distraction.

“I think it’s that way for all cancer patients. You have to be optimistic,” he said. “The idea that death is visible out there somewhere, it’s crippling if I do that. So I don’t.”

It’s taken time for Mitchell to get comfortable with his patient voice and all that it implies. But he said he’s liking the sound of it.