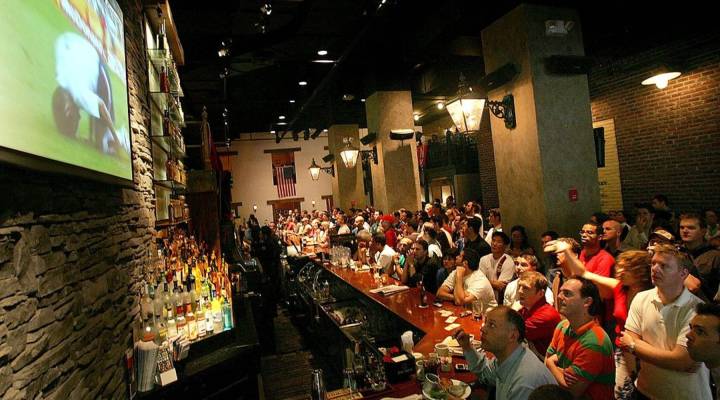 It’s that “upfronts” time of year, when TV broadcasters make their pitch to advertisers.

ESPN takes the stage in New York on Tuesday morning. And after years of trying to figure out how to count it, the sports channel will be pitching the size of its out-of-home-audience, all those folks watching in bars, at restaurants, at airports, and in the doctor’s office.

He said millions of people watch live television out of their home each day. “And for ESPN, that’s been big,” Bulgrin said. “If you’ve been in a commercial establishment, chances are ESPN has been on.”

But up till now, just how big that out-of-home audience is has been tough to say.

“With this new service, we’re now adding this audience into our traditional ratings to give our clients a combined number,” said Nielsen’s Sara Erichson. The new count uses what’s called a “portable people meter.” It’s a cell phone-sized device that records what the people who carry it are exposed to. It uses audio codes, embedded into all television programming, that viewers can’t hear but the people meter can pick up.

Erichson said the new out-of-home numbers are showing significant bumps in total audience for some channels. Sports programming is recording about a 9 percent increase in viewership. That’s a boost ESPN needs in the world of cord-cutters and cord-nevers.

“The precipitous decline in the total amount of audience really has ignited ESPN and a couple other live sports programmers really to get behind this effort,” said Marty Conway, a sports marketing professor at Georgetown University.