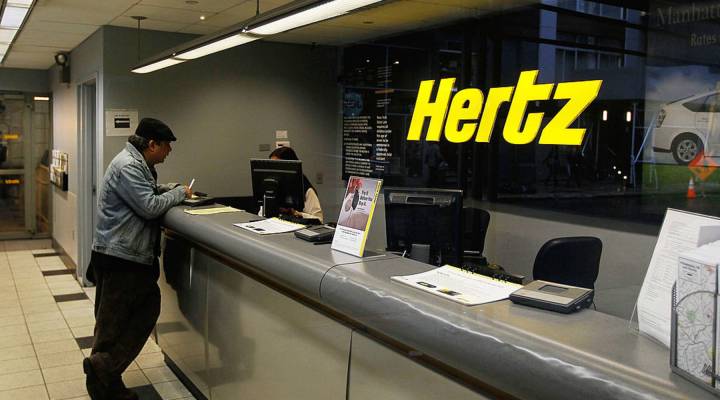 COPY
“Some rental car companies have been afraid to charge for no-shows with the fear that their competitors won’t and it would be used as a marketing campaign against them,” said John Healy, who follows the car rental industry for Northcoast Research. Chris Hondros/Getty Images
I've Always Wondered ...

“Some rental car companies have been afraid to charge for no-shows with the fear that their competitors won’t and it would be used as a marketing campaign against them,” said John Healy, who follows the car rental industry for Northcoast Research. Chris Hondros/Getty Images
Listen Now

For flakes, the rental car industry is a beautiful thing. That’s because unlike the airline and hotel industries, the rental car business generally doesn’t penalize customers for bailing on reservations. Even at the very last minute.

In fact, you could go online right now and book 10 reservations at 10 different car rental companies and make your decision at the airport.

“[You can] go to the line that’s shortest and take that booking, and just leave the others by the wayside,” said Chris Brown, executive editor of Auto Rental News.

Or you can leave all of them by the wayside.

How did this little island of forgiveness survive in such an unforgiving travel industry?

Back when the business began, auto manufacturers like Ford and General Motors owned car rental companies, said John Healy, who follows the industry for Northcoast Research. He said manufacturers used rentals as a way of getting some payoff for models they overproduced and couldn’t sell.

“Some rental car operators thought about their business not in terms of making money on renting the cars,” Healy explained. “But from an alleviation of stress on the manufacturing side of the business.”

But operators are thinking about money now. No-show rates are easily above 20 percent, and companies that use third-party sites like Expedia and Kayak pay about $5 a reservation whether people show up or not. That’s roughly $15 million down the drain every year, according to Healy.

Even so, policies are unlikely to change unless all the players get on board.

“Some rental car companies have been afraid to charge for no-shows with the fear that their competitors won’t and it would be used as a marketing campaign against them,” Healy explained.

The closest the industry has come is prepaid reservations, where you get a cheaper deal but pay a stiff penalty if you bail.

To further protect themselves, companies routinely overbook. But if they get the numbers wrong, they may end up doing the unthinkable — point customers to the competition, like Mark Dufresne.

“We’ll get calls from people standing in line at the airport at car rental companies going ‘I have a reservation and I’ve been standing in line for three hours and they’re waiting for cars to return — do you have any cars?’” Dufresne said.

He said sometimes customers practically beg him to take their credit card information when they reserve over the phone.

“Customers feel sometimes that by giving their credit card, they’re guaranteed to have a car,” Dufresne explained.

But it doesn’t make a difference, he said. So, flakes — rejoice. Your friends may get mad at you, but rental car companies won’t hold a grudge.