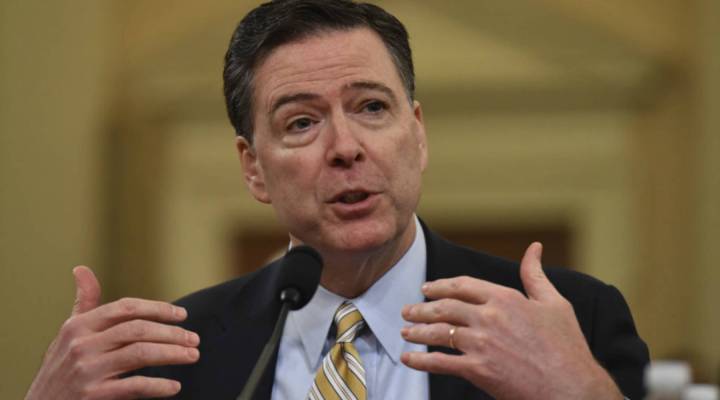 COPY
The firing of FBI Director James Comey, above, was a "bombshell," says Ian Bremmer, president of Eurasia Group. "But I don't think it has much impact on the markets." NICHOLAS KAMM/AFP/Getty Images

The firing of FBI Director James Comey, above, was a "bombshell," says Ian Bremmer, president of Eurasia Group. "But I don't think it has much impact on the markets." NICHOLAS KAMM/AFP/Getty Images
Listen Now

There’s been a lot of talk about how President Trump’s decision to fire FBI Director James Comey could reverberate throughout the economy — slowing or halting progress on health care reform, tax reform and infrastructure investment. But these agenda items were already moving at a sluggish pace, argues Ian Bremmer, president of political risk consultancy Eurasia Group.

Bremmer said the firing won’t factor much into the markets. He joined us to talk about the factors that do have an immediate impact on them, Russia’s influence on global affairs and the future of world trade.

The following transcript has been edited.

David Brancaccio: Do you buy this thesis that Comey’s firing could slow down President Trump’s domestic policy agenda?

Ian Bremmer: I think the markets were already coming to conclude that this was going to take a long time, whether it’s health care, infrastructure, taxes — everything but regulatory rollback that Trump can do by himself. Yes, I guess you could say this slows it down further, but it was already kind of glacial.

Brancaccio: So you wouldn’t call this a bombshell when the news hit yesterday about Mr. Comey having to abruptly leave?

Bremmer: Oh, it’s a bombshell. Absolutely, in the sense that it causes questions about the democratic process in the United States, both domestically and abroad. But I don’t think it has much impact on the markets. The markets only react to these big, you know, sort of political issues, either when they’re already looking for bad news because the economy’s heading south, or because there’s something direct and immediate that’s going to have a market impact. You know, a war starts.

Brancaccio: The Russia questions here go beyond the U.S. electoral system. The world wonders if Russia has the capacity to influence elections anywhere, really. Which I suppose has implications for the future of global business and the world economy.

Bremmer: Absolutely. I mean, Russia as an economy, as you know, is quite small. It’s actually smaller than Canada, smaller than Italy at this point. But their ability and willingness to hit other countries, undermine the democratic process, use asymmetrical cyber offensive capabilities that are very difficult to combat. No one’s figured out what to really do against the Russians. In the case of Obama, it was sort of talk big and carry no stick. In the case of Trump, it apparently is kind of complicit with them anyway. The French were very angry; clearly the Russians were almost certainly involved in the hacks and the release of information against Macron. It didn’t affect the outcome, but doesn’t mean the Russians weren’t trying, right? And there’s very little to do to respond. So I do think that this facilitates greater polarization, domestically, inside a lot of advanced industrial democracies — in the U.S. and Europe.

Brancaccio: If there is influence in the political process, it makes the world just a little bit more nationalist and a little bit less all-for-one, one-for-all globalists.

Bremmer: And here’s an issue where you not only have the politics with a whole bunch of people inside countries saying, “We’re not as interested in our government supporting global trade or being the global policemen or promoting rule of law internationally.” But you also have the economic process, which is, you know, if you’re a big U.S. multinational, Chinese labor is expensive, and you don’t need as much labor going forward because of automation. So supply chains are shrinking for that reason, too. When the economics and the politics come together, that’s when you have a market impact, and I think you do see a lot more protectionism that’s going to make it harder for corporations internationally. It’s going to create a lot more inefficiency.