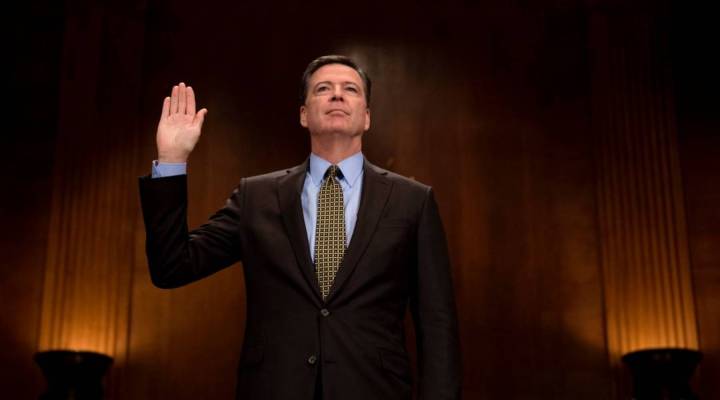 COPY
Former FBI Director James Comey is sworn prior to testifying before the Senate Judiciary Committee on Capitol Hill in Washington, D.C., on May 3. JIM WATSON/AFP/Getty Images

Former FBI Director James Comey is sworn prior to testifying before the Senate Judiciary Committee on Capitol Hill in Washington, D.C., on May 3. JIM WATSON/AFP/Getty Images
Listen Now

The networks had countdown clocks, television ads were bought and sold and some bars even opened early, offering food and drink specials.

Former FBI director, James Comey, who was fired by President Trump last month, is testifying in front of a Senate investigation panel and there’s no shortage of capitalization on the hype surrounding his appearance.

“It’s definitely the largest Facebook response we’ve had for any of our events,” he said. “I think we’re up to 3,600 people interested, which is surprising but exciting at the same time.”

For a little perspective, capacity at Shaw’s Tavern is 120 people inside and another 40 people can fit on the patio. One journalist tweeted Thursday morning that the line to get into the bar was a block-long half an hour before the start of the testimony.

Current line to watch Comey hearing at Shaw’s Tavern in DC stretches for over a full block right now… pic.twitter.com/8OrAr3Irvq

When the Senate Intelligence Committee released Comey’s prepared testimony Wednesday, political junkies and news nerds gobbled it up (and, of course, took to social media to talk about it).

“It turned out to be just the two of us, seated at a small oval table in the center of the green room.”https://t.co/mBWYaN9xXI

But only about 10 percent of the American public are politics junkies, said Michael Cornfield, associate professor of political management at George Washington University. If the testimony is more like a detective story, though, that means a more diverse crowd will tune in.

“If this is just a ‘he said, he said,’ where Democrats believe Comey and Republicans believe Trump, then it’s a wash,” said Cornfield. “The decision on how big this gets will hinge on the eight Republican senators on the committee. What they have to decide is, are they going to pursue the truth wherever it goes? Are they going to insist on the rule of law, wherever it goes?”

If there is high drama, that would mean a bigger audience for advertisers, but that’s a big if.

“We don’t really know how many people are going to want to watch this thing live in real time,” said Lynn Vavreck, a political science professor at UCLA and expert in political ads. “If tens of millions of people tune in like one of those debates, then it is a nice marketing opportunity.”

At least one group is hoping a lot of people tune in whether there’s drama or not. A Super PAC supporting President Trump has reportedly already spent almost half a million dollars on an ad during the testimony. The ad, called “Showboat,” was released Tuesday by Great America Alliance and attacks Comey’s character.

Updated, June 8: This story was updated to include more information.