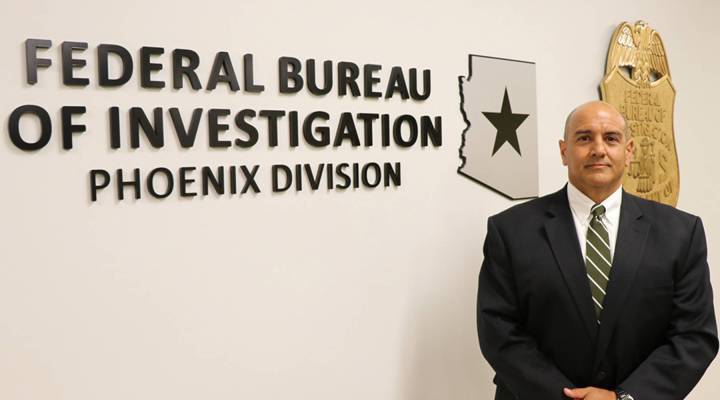 Tucked away in an industrial park on a desert campus near the outskirts of town is the Phoenix bureau of the FBI.

Inside, past security, a new picture hangs on the wall: acting Director Andrew McCabe has replaced former Director James Comey. In Phoenix, Special Agent in Charge Michael DeLeon said that on the ground, despite the uncertainty in the upper ranks, not much has changed.

This week, Christopher Wray, President Trump’s pick to run the FBI, appeared at Senate confirmation hearings. Wray was tapped by Trump in the wake of Comey’s firing and the Russia election probe.

The FBI has 56 field divisions across the country. Because of the location in the Southwest, DeLeon said the Phoenix division frequently works with state and local agencies as well as other nations.

“We have 22 tribes here with numerous reservations and, of course, we also have Mexico to our south,” DeLeon said.

The FBI field office in Phoenix.

The tribal agencies lean on the FBI because they lack adequate resources to patrol their vast jurisdictions.

And sometimes the bigger, urban departments need help, too. For more than a year, a serial shooter terrorized the streets of Phoenix. Police Sgt. Vince Lewis said his department was not making much progress on the case.

“As many as 10 homicides in the valley were linked to that, and we had not much to go on other than a description or perhaps a vehicle,” he said.

Lewis said his department turned to the FBI for access to its nationwide database, generating more than 30,000 tips that led to an arrest this year.

“FBI helped our detectives meticulously comb through and look for those nuggets that were crucial in helping us to identify and arrest a suspect in that case,” Lewis said.

The bureau also works closely with one of the biggest businesses in the Southwest — the defense industry. Michelle Hart, with Nammo Talley, an arms company in Mesa, said the company is hit by hundreds of cyber attacks every day.

“Defense contractors in the United States are magnets for various bad actors and nefarious individuals and even foreign agents,” Hart said.

The FBI helps the company sort out real clients from attempts of state and corporate espionage.

DeLeon was appointed by Comey, but he’s always reported to McCabe, so he said it wasn’t an interruption to the chain of command when McCabe took over.

“We have not missed a beat, we won’t miss a beat, and former Director Comey would be upset with us if we did miss a beat,” DeLeon said.

The new FBI director will inherit an agency with a budget of more than $9 billion.