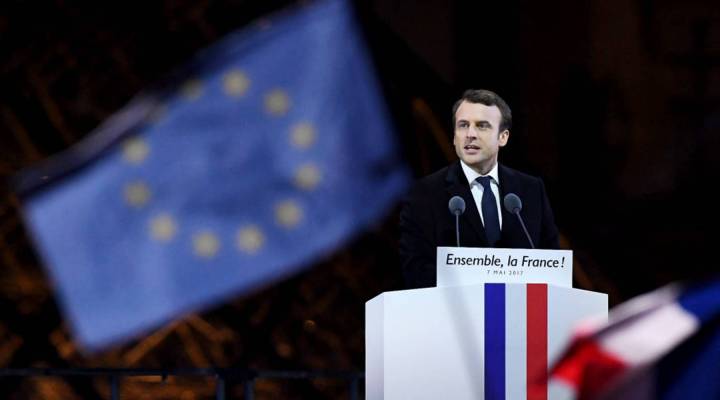 Though France has elected Emmanuel Macron as its new president, the centrist candidate may run into some big challenges for his reform plans.

He faced off against the far-right politician Marine Le Pen, who was his stark opposite: an anti-EU, anti-immigration candidate who called for protectionist measures to defend French companies against foreign competition. Macron ended up winning by about 66 percent to roughly 33 percent.

The BBC’s Gavin Lee said that Macron is a paradox. Macron founded his party, En Marche!, in just April of last year. He ran as someone who was “neither left nor right” — an outsider who could change politics.

“Yet he was a banker at Rothschild for years. He went to all the elite schools in France,” Lee said.

While one might have expected the euro’s value to rise, the currency was down 0.4 percent against the dollar at one point Monday morning.

A jump in the euro after the first round of the election, and high expectations for Macron’s victory in the second round, may have to do with the dampened gains. Heading into the weekend, Macron had a 20-point lead in the opinion polls over Le Pen.

But in the financial markets, there is a realization that he needs a majority in the legislative elections next month, or at least needs to form a viable coalition, to avoid becoming a lame duck president.

He’s going to face an uphill struggle to be able to implement some of the reforms, particularly the labor market reforms that he’s been promising. Macron has called to make them more flexible, which would include making it easier to hire and fire workers. When he was economy minister under the current president, Francois Hollande, his attempts at labor market reform caused huge turmoil.

Parliament has 577 seats, but many doubt he can get the majority, according to Lee.

“He’s aware, he said, of the anxiety and doubt, that he can’t get the united support given how fractured it is with the far-right party and their supporters at 33 percent,” Lee added. “So I think that will be key to see in a month’s time, what kind of movement he’s got and whether he has to power share.”