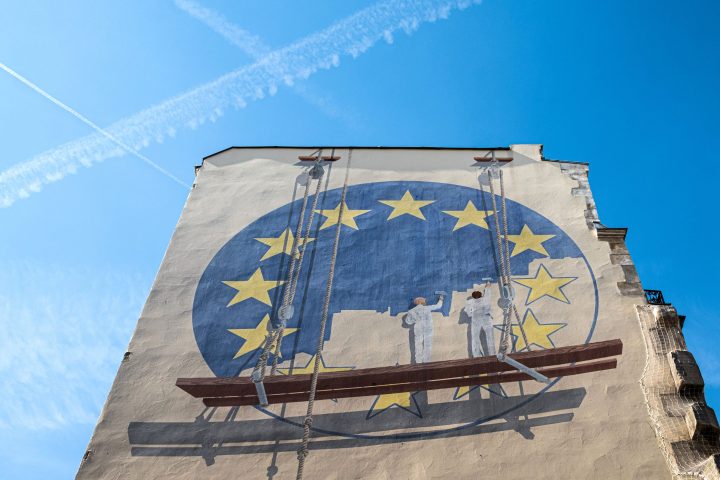 COPY
A trompe l'oeil shows two workers painting the European Union flag on the side of a building in the French capital Paris on May 23, 2019. - Europe kicked off voting across the continent in a contest in which rising populist forces are hoping to make significant gains, threatening closer EU integration. JOEL SAGET/AFP/Getty Images

A trompe l'oeil shows two workers painting the European Union flag on the side of a building in the French capital Paris on May 23, 2019. - Europe kicked off voting across the continent in a contest in which rising populist forces are hoping to make significant gains, threatening closer EU integration. JOEL SAGET/AFP/Getty Images
Listen Now

Millions of European voters go to the polls this weekend to choose  lawmakers for the European Parliament. The election has been called “a battle for the soul of the European Union,” which could have far-reaching economic and political consequences.

“What is at stake, fundamentally, is the survival of the European Union project. Are we going to break it or keep it?” asked Dominic Moisi of the Institut Montaigne, a Paris-based think tank.

Moisi believes that President Donald Trump’s arrival in the White House, and the inexorable rise of China, mean that the member states of the EU must forge ever-closer links with each other and resist the temptation to loosen the bonds and become less interdependent.

“There is less America in the world. And much more China. There should be more Europe,” he said.

“More Europe” is a familiar catchphrase of those who believe that more economic and financial decisions should be made at European level, rather than nationally, by institutions as the European Commission, Council and Parliament.

“When he was elected two years ago, it was the first time, for many years, that a main national politician in western Europe had run an election on an openly and admittedly and proudly pro-European message,” said Alexandre Holroyd, an elected member of France’s National Assembly representing Macron’s party, En Marche.

Since his election, Macron has cast himself as the savior of Europe. He’s called for a joint EU military force, a common defense budget and a finance minister for the whole of the group of 19 member states that use the euro.

“More cooperation between members states of the European Union is likely to guarantee what the EU has achieved, which is peace and further prosperity and co-operation in all the different types of fields where we need to be together,” Holroyd said.

The message from the main rival party in these European elections, Marine Le Pen’s right-wing party, National Rally (formerly National Front), could not be more different.

At a recent campaign rally, Le Pen wound up her speech by declaring: “Long live a wonderful Europe of Nation States!”

This sums up the National Rally’s main objection to the EU.

“We want the nations back again. We want to be able to choose if we want, or do not want, to welcome immigrants in France. We want to give the priority of employment for French companies and French people,” said the National Rally’s chief spokesman, Laurent Jacobelli.

But, he says, his party is definitely not calling for “Frexit.”

“We don’t have to break everything. We’ll change everything from inside,”  Jacobelli said.

Euroskeptic parties in at least seven member states, including Italy and Germany, are expected to do well in the European elections. Most of them have agreed to unite to agitate in the parliament for “less Europe.”

However, not every observer sees this developing into an existential struggle between integrationists and nationalists, between populists and progressives.

Dominic Walsh, a senior analyst with the Open Europe think tank in London, said that the euroskeptics are projected to win around a quarter of the seats in the European Parliament, which, if the mainstream pro-EU parties unite, would not be enough to block legislation.

Nevertheless, integrationists, like French lawmaker Holroyd, are worried about the corrosive effect of a big influx of anti-EU parties into the parliament. They fear it might eventually sap and undermine the will to build stronger protections for European interests and values.

Holroyd said he is particularly nervous about the psychological blow that would be inflicted on the EU if Le Pen’s party beats Macron’s in the European elections.

“That would be disastrous,” he said, “because France is not any other European country. It is a founding member of the EU. And the signal that would send across borders would be absolutely catastrophic.”