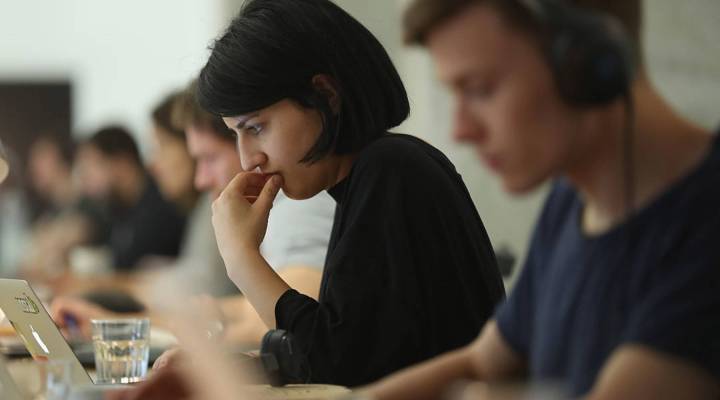 COPY
Millennials are now more anxious than they were in 2015, the first year of our poll. Sean Gallup/Getty Images
Economic Anxiety Index®

Millennials are now more anxious than they were in 2015, the first year of our poll. Sean Gallup/Getty Images
Listen Now

Back in October, 2015, Marketplace partnered with Edison Research to start asking Americans about their feelings on the day’s big economics issues. Our reporting just wasn’t matching up with the headline gains in the economy. So, we asked you how stressed you felt about the economy on a scale of zero to 100. Our latest poll numbers are back, and there looks to be a bright spot: Americans are feeling less anxious about the economy, mostly. Larry Rosin, the president of Edison Research, sat down with Marketplace host Kai Ryssdal to sift through the results of the Marketplace-Edison Research Poll. An edited transcript of their conversation follows.

Kai Ryssdal: Give me the headline number, would you? The economic anxiety index out of this thing? Because there have been some changes since last we spoke.

Larry Rosin: We have been doing this series going back to a year before the election, back to the fall of 2015. And as we’ve been doing this series, we’ve watched the level of anxiety that people have about the economy go up and up and up, and this is our first one since the election. And the numbers have actually dropped pretty dramatically, down basically to the level they were in the fall of 2015 when we started this process.

Ryssdal: Except, it has to be noted, for 18- to 24-year-olds, who are now more anxious than they’ve ever been. What gives with that?

Rosin: The best indication we can see from this study is they are also, by far, the least in approval for President Trump’s management of the economy, and of course they did not vote for Trump in huge numbers. So the best guess is probably that that group is so unhappy with the current political situation, perhaps, that it has increased their anxiety. But what is interesting is that with the exception of that 18 to 24 group, pretty much everybody else reduced on their anxiety level, and that’s both Republicans and Democrats. And independents.

Ryssdal: Yeah, you break it down, though, by issue area, and our numbers now show that health care as a national economic issue is the biggest thing that people are worrying about.

Rosin: It sure seems to be. We fielded this study right after the attempt to repeal and replace Obamacare with a new act. And then the withdrawal of that. And maybe that heightened the concerns a little bit more. I just think it’s an endless cause of stress for so many people, feeling that they’re sort of on the razor’s edge when it comes to making sure they have coverage and making sure that coverage gets them the health care that they need. And that it will be there going forward.

Ryssdal: Which gets us to the next thing that I wanted to point out. Seventy-four percent of Americans in our poll say they believe the government in Washington has forgotten about them, and that goes across party and identification.

Rosin: Yeah, this is so much of the fun of being a survey researcher is watching things like this. So in the lead-up to the election, candidate Trump was making a huge issue of the idea that the data you get from the government was untrue, and people seemed to follow his lead. Republicans overwhelmingly agreed, and Democrats tended not to agree with that. We asked now that there’s a new government, a new administration, and while Republicans are still more likely to think that the data from the government is untrue, their numbers have come way down. Democrats’ numbers have come up a little bit, but not as much so in general people’s distrust of the government is down as compared to when we asked before the election. So it really shows that who’s in charge, who’s leading the discussion, really does have an impact on what people think.