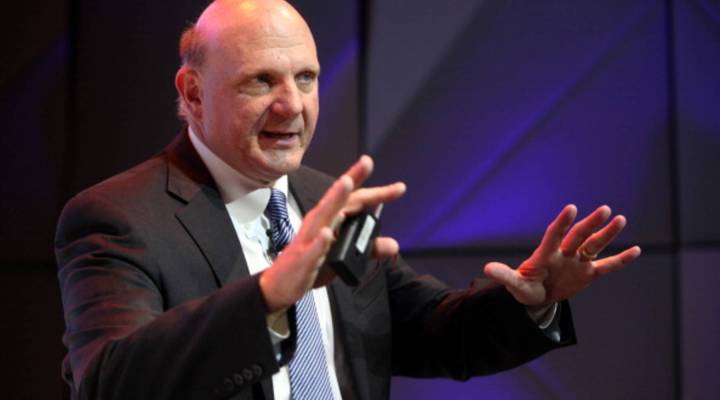 COPY
"Every day the government will spend money or receive money from taxpayers or it won't. And ultimately, I think people really do care as budgets get prepared, as people like to keep their jobs," Steve Ballmer said. Adam Berry/Getty Images

"Every day the government will spend money or receive money from taxpayers or it won't. And ultimately, I think people really do care as budgets get prepared, as people like to keep their jobs," Steve Ballmer said. Adam Berry/Getty Images
Listen Now

President Trump said today his tax reform plan will be ready on Wednesday. While we’re waiting, how about getting an idea of where exactly all those trillions of tax dollars are going?

There’s a new website called USAFacts, and its stated goal is to help anyone search through mountains of government data and see where their tax dollars end up. Steve Ballmer, the former CEO of Microsoft, is the man behind the site. Kai Ryssdal spoke with Ballmer about why he created USAFacts, why he thinks of it kind of like a 10-K for government and why it’s important for him that the facts reflected remain nonpartisan and complete. Below is an edited transcript of their conversation.

Kai Ryssdal: Why did you do this? You just looking for something to do in retirement?

Steve Ballmer: Well, I was actually talking to my wife right after I retired about our philanthropic work. And we’re focused in on kids who grow up with less shot, let’s say, than they deserve at the American dream. And I said, “Look, it’s OK, all we really need to do is to pay our taxes, because the government really serves those communities.” And she didn’t find that a very good answer. And I found it really important then to go off and really learn the way I like to — I’m a numbers guy — by the numbers. What is government doing with our tax dollars and how successful are they being?

Ryssdal: So how did you do it? I mean did you go talk to a couple of people and said, “Listen, if I wanted to do this what would I have to do? Because it’s an overwhelming amount of data.

Ballmer: Well, what I really did is I went to my old trusty search engine, in my case Microsoft Bing, and I started searching around the internet to try to find the kind of data that was useful. Some of the stuff was pretty good, but it didn’t have as much detail, it didn’t look as much at outcomes. And I just said, “Look, I really would like to dive in and understand this more.” I went looking for the equivalent of a business 10-K. And certainly somebody must do — government requires companies that are listed to do it, you know, public companies. Why doesn’t government do it itself? But such a thing didn’t exist, and I made that kind of my retirement project.

Ryssdal: So you’ve got this data now, and it’s really well presented —  the website is great, and you actually came up with a government 10-K, which I spent some time flipping through this morning, and honestly, you could lose yourself in there because there’s all kinds of interesting little tidbits. But what do you want people to do with this? I mean, you’re a little bit like Mulholland and Los Angeles water, right? “Here it is. Take it.” Right?

Ballmer: Yeah. No, I hear you. It’s very important to me that we be entirely nonpartisan and we be very complete, because part of what I think happens in the political dialogue is two things. No. 1, people will take a number out of context, and they’ll say it’s very large when it may not be very large in the context of what’s happened historically or other numbers. The second thing is people will use adjectives, and somebody will call something huge and somebody else will call another thing small. And they really are not very far apart, and numbers don’t know partisanship. They don’t know how to be liberal or conservative. But we don’t want to be the guy, the people who say, “This is what the country should do.” We want to facilitate, let me say, the democratic process and people really sharing this kind of information.

Ryssdal: Small “d” democratic, I get that, and I appreciate the motive. But surely you understand that you are now injecting fact into a post-fact world.

Ballmer: I don’t know, I’m enough of an optimist to assume ultimately numbers matter. Facts matter. I mean, you could say in the political debate, “Will these be more front and center or not?” But every day jobs will be created or they won’t. Every day the government will spend money or receive money from taxpayers or it won’t. And ultimately, I think people really do care as budgets get prepared, as people like to keep their jobs. I think the government and government entities will be every bit as accountable as any business over time.

Ryssdal: Do you have a favorite nugget out of all these reams and reams of data you’ve got?

Ballmer: I do have a favorite nugget. Nobody thinks it’s as sexy as other favorite nuggets, but I like the fact that I think since 1980 — I’ll try to remember it precisely — total households are are up about 40 percent and house fires are down about 50 percent. And of all the things that are nonpartisan. Fires should be nonpartisan. And of course, that’s some combination of the way things get built now versus then, the quality of the fire departments and their ability to do their job. But it is really stunning how much safer we are from fire than we were in 1980.