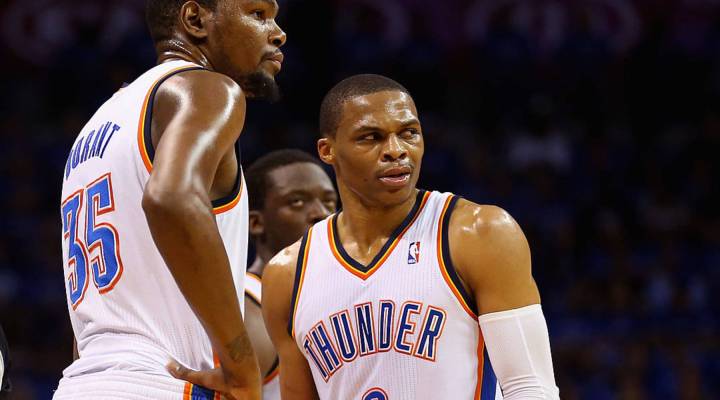 COPY
Kevin Durant and Russell Westbrook are just two of the many pro players raking it in under the new salary cap. Ronald Martinez/Getty Images

Kevin Durant and Russell Westbrook are just two of the many pro players raking it in under the new salary cap. Ronald Martinez/Getty Images
Listen Now

You could almost hear the frustration of basketball fans around the country, except for those in Northern California, when Kevin Durant announced he’ll sign with the Golden State Warriors.  The contract is reportedly a two-year, $54 million deal.

But Durant is far from the only player raking it in during this free agency period.  From starters to bench-warmers this year’s free agents are seeing record contracts, which was boosted by a surge in television revenue for the NBA.

Wayne McDonnell is the Academic Chair of Sports Management at NYU’s Tisch Sports Institute. Marketplace host Adriene Hill talked with him about the pricey landscape of NBA salary caps.

On the current free agency period:

What’s really different is that the quality of free agents that were available, as well as the price to which a lot of teams were more than willing to pay for free agents. Teams were willing to spend up to $2 billion on approximately 29 free agents, which was simply remarkable if you think about it.

On how teams compete for top tier talent:

On how other pro-athletes feel about this new cap:

I think NFL players are both very upset at both the NBA and Major League Baseball, particularly their unions because they’ve done an excellent job of getting guaranteed money for their constituents. So I think the NFL players are probably looking, not jealous, but just upset of the fact that a top [NFL] players is getting a $140 million deal and a middle tier NBA player is making that money as well. There is clearly a disparity, but you’ve got to applaud the unions of both the NBA and MLB for doing great work for their constituents.