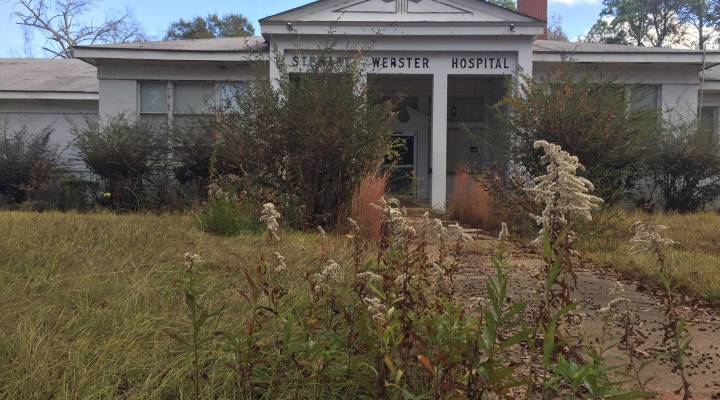 COPY
When Stewart-Webster Hospital closed in 2013, residents say they lost a sense of security along with a health care provider. Elly Yu

When Stewart-Webster Hospital closed in 2013, residents say they lost a sense of security along with a health care provider. Elly Yu
Listen Now

Cindy Jones still can’t help but think about the timing of things. Stewart-Webster Hospital, the place her family had gone to for years, closed in March 2013. A month later, her husband Bill suffered a heart attack.

“He came in from a day of farming and ate supper and then sat down to watch David Letterman, and all of a sudden he got quiet, and we knew something was wrong because he wasn’t laughing at David Letterman anymore,” Jones said.

According to the county coroner, it took about 10 minutes for paramedics to arrive at their home. Then it took almost a half hour to get to the town of Cuthbert, Georgia, about 25 miles away, where the nearest hospital is. Jones’ husband was pronounced dead in the emergency room 20 minutes after he arrived.

Jones said she doesn’t know if it would have made a difference to have had her husband taken to the local hospital, had it still been open, but can’t help but wonder.

“I feel like we lost time there if we had just, you know, gotten help nine miles from my home,” Jones said.

Cindy Jones’ late husband, Bill, suffered a heart attack in March 2013. After reaching the nearest hospital 25 miles away, Jones’ husband was pronounced dead in the emergency room 20 minutes after arrival.

Stewart-Webster Hospital, in Richland, Georgia, is one of about 80 hospitals that have closed across the country since 2010, according to the North Carolina Rural Health Research Program at the University of North Carolina at Chapel Hill. When a small community loses its hospital, residents say it loses more than just its health care provider. The community also loses jobs and a sense of security that emergency help is nearby.

Stewart-Webster Hospital, which sits on a residential street in Richland, had 25 beds and emergency room before it closed.

“We saved a lot a lives. We did have to transfer them to a bigger hospital, but they were stabilized at Stewart-Webster,” said Sybil Ammons, the Stewart County coroner.

Ammons, who used to be the director of nursing at the hospital, said the hospital had an important role in helping people injured in all kinds of emergencies, from car crashes to hunting accidents.

Today, the white building that housed the former hospital is locked up and surrounded by overgrowth. The building’s paint is chipped.

“It’s just devastating to see it in the shape it’s in now,” she said. “It was clean and neat with flowers everywhere. My aunt had planted some daylilies. We took so much pride in this hospital. Everybody here did.”

When it closed, Ammons said about 70 people lost their jobs.

The rate of rural hospital closures has gone up in recent years, said George Pink, deputy director of the North Carolina Rural Health Research Program. He said almost half of all rural hospitals are losing money.

“There is just a lot of different things happening all at the same, and this has put enormous financial pressures on rural hospitals,” Pink said.

Most that have closed are in states like Georgia that didn’t expand Medicaid coverage, he said, and rural hospitals are still recovering from the recession.

“People who live in the South and rural areas in the South are older, sicker and poorer, have greater dependence on Medicare and Medicaid than people living in urban centers,” he said.

Back in Richland, Mayor Adolph McLendon said having a hospital in town is not just about health access but also about the rural economy. He said since Stewart-Webster Hospital closed, a lot of shops on the city’s main road have shuttered.

“Broad Street was full of businesses, and it’s not full of businesses now. So we’re trying to comeback, but it’s hard,” he said. The town is trying to get a six-bed emergency treatment center, but McLendon said they’re still just in the talking phase about it and haven’t yet raised the money.

For coroner and former hospital nurse Sybil Ammons, attracting new businesses to Richland without a hospital is a tough sell.

“Without health care, people don’t want to stay here. I don’t blame them,” she said.