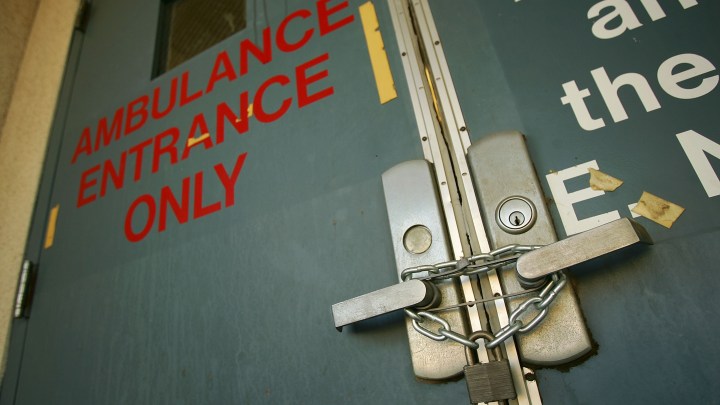 COPY
Rural hospital closures have increased during the pandemic. Many hospitals were run by lab companies that left difficult financial and legal problems behind. David McNew/Getty Images

Rural hospital closures have increased during the pandemic. Many hospitals were run by lab companies that left difficult financial and legal problems behind. David McNew/Getty Images
Listen Now

The town of Linden, Tennessee, on the Buffalo River, had its own hospital up until late 2020 when it abruptly closed. The 44-bed facility served Perry County’s population of 8,000.

Shelly Sharp was a licensed practical nurse there — until she wasn’t.

“They came in and said the hospital would be closing, and the next day or two, they closed it,” Sharp said. She now works at the town clinic, where patients often show up with chest pain or other emergencies that require hospital-level care. “It’s frightening.”

Perry Community Hospital was in serious financial trouble before the business collapsed. The state’s dominant private insurer, BlueCross BlueShield of Tennessee, said the hospital was overcharging for lab tests and demanded nearly $5 million back.

Rural hospital closures only picked up steam during the pandemic. And some of those that went out of business, like Perry Community, may have a harder time than others attempting a comeback. Many closed hospitals were run by companies in the lab business that left behind financial and legal problems that are difficult to unwind.

“It’s a common problem, unfortunately,” said Michael Perkinson, a lab technician who worked at the hospital and now works at the town clinic, where he still screens vials of blood for glucose, electrolytes and lipids — just on a much smaller scale.

“We did a lot of drug screens out of Florida. Thus, the problem,” Perkinson said.

Insurance contracts often allow small, rural hospitals to charge more for lab work than free-standing labs to help prop up hospitals in remote areas. But at Perry Community, BlueCross BlueShield said an audit found improper billing codes and charges for people who had never been patients at the hospital. And an arbitration panel recently sided with BlueCross, which has been challenging similar schemes across the region.

The lone hospital in neighboring Decatur County also came under investigation for inflated lab billing before closing. Another Florida lab company snapped up three hospitals in East Tennessee — two of which are now closed. And in 18 rural hospitals across the Midwest, Florida businessman Jorge Perez was just convicted in a $1.4 billion fraud related to lab billing; eight of those hospitals shut down.

Accountant Paul Traczek of Wipfli helps investors decide if shuttered hospitals can profitably reopen. He said the problem for these hospitals is that insurance companies may not work with a new owner until the disputed payments are settled.

“Really it’s determining … are you sorta stuck with [that liability]? Because if you are, no matter what you do, it may not work,” he said.

And the debts pile on top of other legal concerns, like who still controls the hospital.

In Linden, Tennessee, yet another Florida lab company, Expertus, bought the hospital there just months before it closed. Mayor Wess Ward has been trying to help find a new buyer. He’s even shown a few investors around, though he said he’s not even sure who unlocked the doors.

Ward has been under intense political pressure. Residents worry about what happens when someone has a stroke and drive time makes all the difference.

“You’re talking about the peace of mind for your citizens that they have a hospital two minutes down the road,” he said.

Then there are the economics. New industrial employers or even retirees are hesitant to relocate when there’s no emergency room. And hospitals are big employers on their own.

Some promising news came through in late April. A group of investors from New Jersey called to tell the mayor they’re on track to take over this summer.

“I’m tickled to death, y’all,” he told the investors on the other end of the line.

Ward said the prospective buyers also happen to be in the lab business, but he has more confidence in this group since it includes some doctors. Still, he said he plans to keep a closer eye on the hospital from now on.