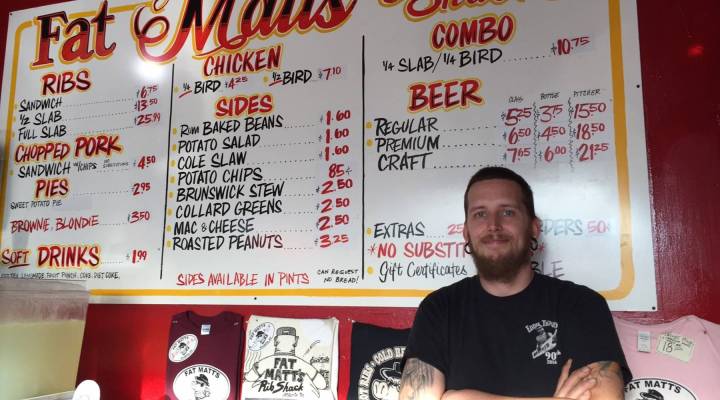 A live band plays at Fat Matt’s Rib Shack, a popular barbecue joint in Atlanta, where only a few tables are filled on a Monday evening. The restaurant is about a half a mile away from where a section of an  I-85 overpass collapsed last week after a massive fire, shutting down part of the freeway and some nearby roads.

“For the most part, we’ve been dead,” Kane said. “It’ll sprinkle in here and there, but, yeah, it’s definitely changed.”

Kane said the restaurant has seen about a 50 percent decrease in customers, and he’s had to let employees off their shifts early because of the lull. He said that doesn’t usually happen, especially on the weekends, when the business is thriving.

“We usually have a line out the door, sometimes to the road, which I wish they wouldn’t line up in the street but what are you going to do? They want ribs,” he said.

Crews work on the part of Interstate 85 that collapsed after a massive fire last week in Atlanta.

Down the road from Fat Matt’s, on the other side of the bridge collapse, a big liquor store, Tower Beer, Wine & Spirits, had to be evacuated during the fire. When the store reopened, manager Stephanie Brown said sales were down. People just couldn’t get there easily by car.

Jeffry Netter, a professor of finance at the University of Georgia, said businesses around the area where the bridge shut down will be affected for a while.

“Say a restaurant or a hotel, I mean they’re in major trouble,” he said.

About 250,000 cars traveled over that section of the highway, according to state transportation officials. Netter said its loss means a huge change to peoples’ commutes, as well as business logistics.

He said that while the problem is temporary, the collapse also affects the city’s image. He said it needs to be fixed fast for the sake of the business environment.

“Atlanta already is known as a commuting nightmare to some extent, and this make that view worse,” Netter said.

Back at Fat Matt’s Rib Shack, Kane said he’s thinking about the months ahead and what it might mean if the bridge is still closed.

“I mean, Fourth of July, Labor Day, Memorial Day, those are our three big days,” he said “So, ugh, that would be pretty bad.”

State officials said they’re working to get the bridge fixed by June 15.