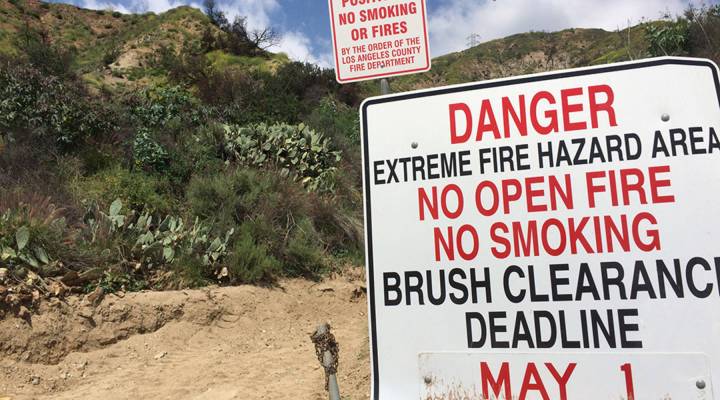 More than a dozen major disasters, including winter storms, tornadoes and mudslides, have already hit the U.S. since President Trump took office. Recovery from disasters involves several federal agencies, which raises the question of what future support can be expected from an administration that has made its name promising major changes in federal management?

Last summer, a few thousand acres of forest burned in the foothills above Duarte, a town just northeast of Los Angeles. The charred remains of trees still stand among new vegetation that sprouted after a winter of unusually heavy precipitation.

The fire left loose soil, which, when heavy rainstorms hit in January, became mud that slid down into neighborhoods.

“Couldn’t see the street, just nothing but mud,” said Alex Hernandez, a gardener who works in the area. “We weren’t able to work for like, two weeks because of the mud.”

Burned trees are still visible among new growth that has sprung up after the Fish Fire in Duarte.

County officials are still tabulating the cost from the deluge. That includes “damages through rainstorms, muds, damages to structures, buildings or any type of asset that each city or agency has,” said Ivan Masayon, a program specialist at the Los Angeles County Office of Emergency Management. “We collect all that information, and then we submit that to the state.”

If the state damage tally reaches a certain threshold, the White House declares it a federal disaster. Damages in Los Angeles County alone have topped $35 million, and costs were high enough statewide that President Trump signed a declaration for California’s January storms. That cleared the way for help from the Federal Emergency Management Agency and other agencies.

The new administration has filled the top spots at some agencies involved in disaster recovery. There’s Ben Carson at Housing and Urban Development and Linda McMahon heading the Small Business Administration. FEMA, however, still lacks a permanent administrator. Experts said that vacancy could cause problems for disaster response.

Temporary leadership “has the potential to weaken our response, especially if it requires involvement of the White House and advocacy of that level,” said Jeff Schlegelmilch, deputy director of the National Center for Disaster Preparedness at Columbia University.

The Obama administration took several months to name a FEMA leader in 2009. But it wasn’t proposing the major government agency shakeups and cuts that the Trump administration wants. Schlegelmilch said Trump has proposed $667 million in cuts to FEMA. It’s not clear what that means yet.

“We’re seeing a major change in the way that disaster preparedness is looked at, and there currently aren’t permanent appointees in these key positions that actually have to operationalize and advocate for that during the budgeting process,” Schlegelmilch said.

The former leader of FEMA under Obama, Craig Fugate, said he doesn’t think Congress will pass huge cuts to the agency.

“I always remind people that the president’s budget is a request,” said Fugate, who oversaw more than 500 major disasters, including recovery from Hurricane Sandy and destructive tornadoes in Joplin, Missouri.

Fugate said he’s also confident the agency will be able to manage disasters in the interim, because he stacked the agency with career employees before he left.

“That was something that we built for the next team,” Fugate said. “From what I’ve seen, and from what I’m watching, they’re doing what really is nothing different than what we would’ve been doing.”

That means places hit by disaster are seeing money and help flow as usual. However, that could change in one respect. Fugate took a major cue from the Obama administration: He got FEMA thinking and planning for future disasters through the lens of climate change.

“Our approach was, ‘It’s happened, it is happening, it’s not going to get better anytime soon.,” Fugate said. “How do we adapt to changing conditions faster than the disasters are occurring?”

That ethos could shift under the new administration. Fugate pointed to a recent executive order that takes away a FEMA mandate that flooded buildings must rebuild at higher elevations to account for sea level rise. Now, he said, they can just be rebuilt the same.