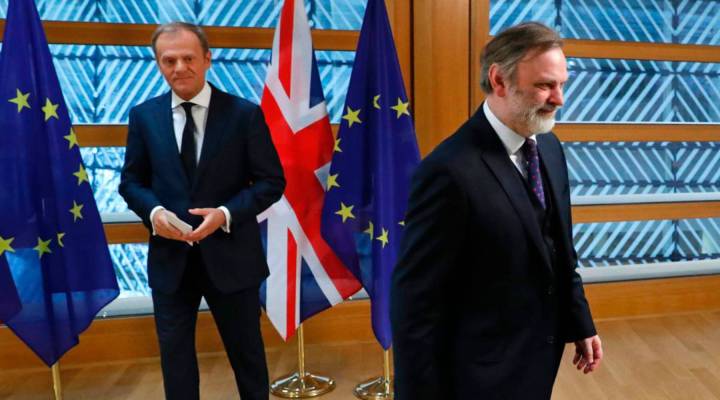 Britain and the EU see the U.K.’s looming exit from the European Union rather differently. As Britain officially starts the two-year exit process with Wednesday’s triggering of Article 50, here’s a look at some of the feuds and fault-lines that lie ahead:

The EU says Britain can’t leave without settling its bill, paying up for the U.K.’s share of staff pensions and projects it has already agreed to fund. European Commission President Jean-Claude Juncker has put the figure at around 50 billion euros ($63 billion).

Britain doesn’t deny that it will have to pay something, but is sure to quibble over the size of the tab. Brexit Secretary David Davis said this week that Britain will no longer be “paying enormous sums to the EU.”

“We will, of course, meet our international obligations but we expect also our rights to be respected too,” he said. “I don’t think we are going to be seeing that sort of money change hands.”

What do we talk about first?

Substantive talks are unlikely to start until May at the earliest — after an April 29 summit of 27 EU leaders to settle their negotiating stance, and after France holds a May 7 presidential election.

When Davis and chief EU negotiator Michel Barnier finally sit down face to face, their first decision will be: What do we talk about?

Britain and the bloc have very different ideas about how the next two years will unfold.

EU officials insist the divorce terms must be settled before talks on a new relationship can begin. That means agreeing on the bill, and ending the uncertainty about the future status of 3 million EU citizens living in the U.K., and 1 million Britons who reside elsewhere in the bloc.

“The first part (is) how are we going to part?” Sweden’s EU Minister, Ann Linde, said last month. “And then we are going to start to see what will our future relations be. I know the U.K. wants this to happen more or less at the same time. And that will be the first discussion that will come up.”

What are the red lines?

One central contradiction looms at the heart of negotiations. The EU says it will not compromise on its core “four freedoms”: free movement of goods, capital, services and workers. The last of those means citizens of EU nations may live and work in other member states.

Britain insists that it must regain the right to control immigration and end free movement from the bloc. Concern over the large number of EU nationals who have moved to Britain in recent years was a major factor for many Britons who voted “leave” in last year’s referendum.

May says Britain will leave the EU’s single market in goods and services and its tariff-free customs union, but nonetheless wants “frictionless” free trade. It is hard to see how the U.K. can impose immigration restrictions without incurring some barriers.

Deal or no deal?

Britain has invoked Article 50 of the EU’s key treaty, setting a countdown clock ticking: In two years, the U.K. will cease to be a member of the bloc.

Officials on both sides hope by 2019 either to have a deal, or an agreement to keep talking during a transitional period.

But there is a third possibility, in which Britain crashes out of the EU without a deal.

Parliament’s Foreign Affairs Committee has accused the British government of not doing enough to prepare for talks breaking down, ending in no deal and “mutually assured damage” to both Britain and the EU. For Britain, it would almost certainly mean steep tariffs on trade with the bloc.

The British government has sent mixed signals. May has said Britain will walk away rather than accept a bad deal, but Davis, the Brexit secretary, says he considers that outcome highly unlikely.

The final deal will have to be approved by both the British and European parliaments — and neither is guaranteed.

“We vote no — that is possible,” Verhofstadt told the BBC recently. “It has happened in a number of other cases that a big international multilateral agreement was voted down by the European Parliament after it was concluded.”