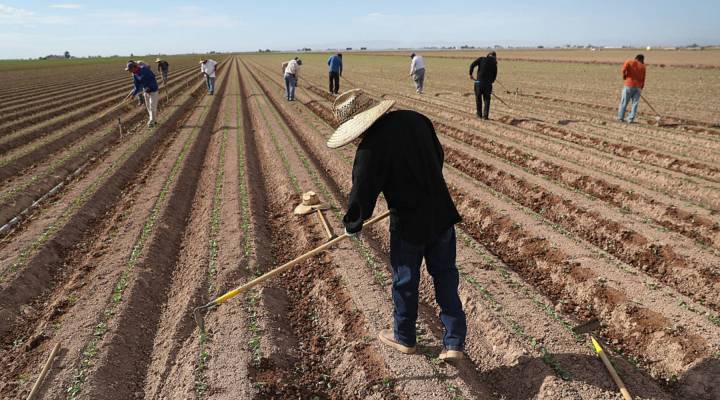 Tighter borders were supposed to mean more jobs for native-born Americans. That’s the theory anyway, but California farmers aren’t living in that world. Instead, they’re competing for a workforce where nine out of 10 people are immigrants, and many are undocumented. While some farmers are raising wages well above the minimum to attract workers, many others can’t afford to. Los Angeles Times economy writer Natalie Kitroeff visited several California farmers to see how they’re coping with a smaller workforce. Host Kai Ryssdal spoke with Kitroeff about what she learned. Below is an edited transcript of their conversation.

Natalie Kitroeff: So Jeff Klein is a farmer in Stockton. He is still farming grapes, but he used to farm more of them. Last fall after the harvest, he ripped out hundreds of acres of chardonnay grapes that his father had planted years ago, so this wasn’t an easy decision. But he’s facing a ton of competition for laborers, and that’s something that a lot of farmers are saying is going on. For Jeff, the result was that he is getting out of the grape business. Essentially, he’s being priced out of the market. His solution is to switch from grapes to almonds, which require a fraction of the human labor.

Ryssdal: They’re just easier to farm, right? You shake the tree, and the almonds fall, and you call it a day, right?

Kitroeff: Yeah. Basically, what farmers told me is three workers per 500 acres.

Ryssdal: You point out a disparity between Jeff Klein’s farm in Stockton, which is in the Central Valley of California, and grape growers in the Napa Valley, where farmworker wages are at, like, $41,000 a year with benefits and the whole deal.

Kitroeff: You know, the grapes grown in Napa, as any wine enthusiast will know, they go into bottles that sell for hundreds of dollars. In Stockton, the grapes don’t produce wine that sells for that much. So there’s a natural limit to what Stockton grape growers can pay their workers.

Ryssdal: But the point being: Native-born Americans don’t seem to want these jobs.

Kitroeff: Right. Even in Napa, $16-an-hour wages are not bringing in native-born Americans yet. That’s been the experience.

Ryssdal: Has to be said that this immigration tightening started under Obama. I mean, it’s Trump’s big thesis here. But they did start under President Obama.

Kitroeff: Obama tightened the border. He ratcheted up deportations. He made it a lot more expensive for Mexicans to cross over. And that slowed the flow of immigrants into this country.

Ryssdal: Given that we’re just now seeing the payoff from the Obama era, a tightening of immigration, it will be a number of years, right, before we see the full effect of whatever it is that Mr. Trump is going to do.

Kitroeff: You would think, although farmers that I talk to are telling me that they’re already seeing workers scared to come to the fields, and they’ve seen a tightening of their own labor force within these first few months.

Ryssdal: Which is unrelated to market forces, right? That’s a political forces kind of conversation.

Kristoeff: Yeah. That is a by-design political result. You know, word travels fast in these communities, and even if a policy hasn’t even been put into place yet and is really just at the conversation level, you can see a kind of economic effect on the ground almost immediately, because what we’re talking about is, you know, humans who get in their car every day and have to drive sometimes long distances to get to work. So imagine if you’re undocumented what the risks are. So that’s a decision that people are making right now. And farmers say the effect is is already underway.

Ryssdal: Thanks a lot for coming in.