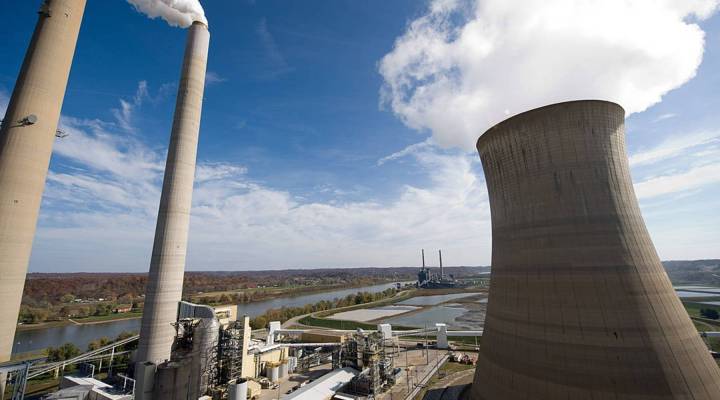 COPY
"The switch from coal to gas really happened because of the shale gas revolution and because of markets,” said Laura Cozzi of the International Energy Agency. Above, a coal power plant from American Electric Power in New Haven, West Virginia. SAUL LOEB/AFP/Getty Images

"The switch from coal to gas really happened because of the shale gas revolution and because of markets,” said Laura Cozzi of the International Energy Agency. Above, a coal power plant from American Electric Power in New Haven, West Virginia. SAUL LOEB/AFP/Getty Images
Listen Now

A new report out from the International Energy Agency says global CO2 emissions remained flat for the third year in a row.

This plateau in emissions comes during a period of global economic growth. According to the agency:

“Global emissions from the energy sector stood at 32.1 gigatonnes last year, the same as the previous two years, while the global economy grew 3.1 percent, according to estimates from the IEA. Carbon dioxide emissions declined in the United States and China, the world’s two-largest energy users and emitters, and were stable in Europe, offsetting increases in most of the rest of the world.”

Laura Cozzi, head of the agency’s Energy Demand Outlook Division, said the biggest decrease came from the U.S., which saw a 3 percent drop in emissions, mainly due to the energy sector.

“A lot of what happened in the U.S. power generation sector was market driven,” she said. “So the switch from coal to gas really happened because of the shale gas revolution and because of markets.”

Last year, emissions in the U.S. were at their lowest level since 1992.

“It’s a positive development to be able to say that you can achieve economic growth without increasing emissions,” said Robert Pollin, co-director of the Political Economy Research Institute at the University of Massachusetts-Amherst. “It shows that if you switch technologies, you can continue to grow … but it will not get us very far down the line because we need much more dramatic cuts in emissions.”

The IEA said it’s too soon to say global emissions have peaked; it will need a few more years of data for that. But the IEA’s Cozzi said stabilizing emissions won’t be enough to stop climate change. It would take a sharp decrease in emissions to slow global warming.