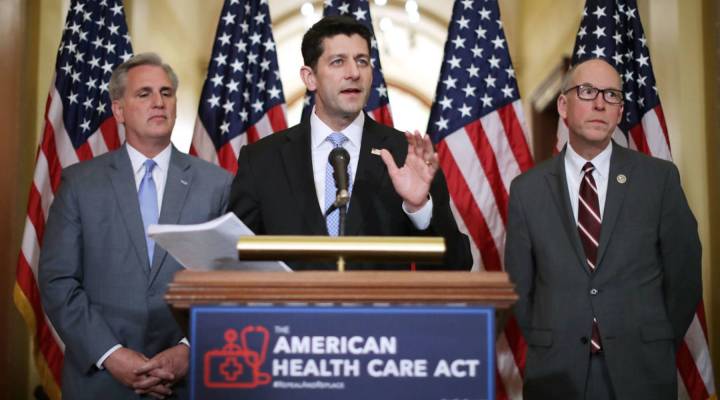 The Congressional Budget Office released its long-awaited score for the Republican replacement for Obamacare, what the GOP is calling the American Health Care Act. The CBO’s report estimates the impact of the bill on people. Sarah Kliff covers health care for Vox, where she is a senior editor. She breaks down what we’ve learned from the report.

Kai Ryssdal: Give me the headlines on this one. What’s a big takeaway for you?

Sarah Kliff: So the big takeaway is this is a very bad CBO report for Republicans. The agency is estimating that 24 million people would lose coverage under the Republican plan. This is way worse than what most analysts were expecting. They were thinking would be in the 10 to 15 million range. And this is going to be yet another obstacle for Republicans plans to repeal and replace Obamacare.

Ryssdal: Do you suppose though that we will hear more from Republicans about the fact that the budget deficit drops by $337 billion instead of the people losing coverage?

Kliff: Yeah, I’m curious to see what we hear. You know, before this, we saw the Trump administration really trying to discredit CBO, saying, “This is an agency that got some Obamacare projections wrong. We shouldn’t necessarily trust them.” So it will be interesting to see, do they seize on the numbers they like? Or do they just say, “Well, this is a bogus agency that has done bad numbers before?” Everything everyone else is going to want to talk about is that 24 million number. That’s really big, and we’ll see kind of where the Trump administration wants to take the conversation.

Ryssdal: Am I right that most of the budget deficit reduction on this bill comes from decreased spending on Medicaid. I mean a bunch of it?

Kliff: Yeah. So this report, it shows an $880 billion cut to Medicaid. A lot of that is from freezing enrollment in the Medicaid expansion in 2020, which would eventually lead to a lot less spending because you’re covering a lot fewer people, and they also generally just want to change the Medicaid formula for funding so that states are getting less money. So a lot of this really is being driven by a big cut to Medicaid, and kind of the reason the deficit is being reduced is because you’re covering fewer people with health care.

Ryssdal: Let’s take this to the voters for a second. You went out to Kentucky not too long ago and talked to people who are on Obamacare about what they thought of the president’s promise to get rid of it. Tell me what you found.

Kliff: So I found a lot of Obamacare enrollees who voted for Trump who thought it was just campaign bluster. They either heard Trump’s promises to repeal Obamacare, and they said, “Well he’s not going to do that. And if he does that, you know, he won’t take our health insurance. He’ll pass something better something more affordable.” And I think, you know, for me, the CBO report, it kind of shows that this promise that Trump has made so many times, that, you know, he’ll cover everybody, that nobody is going to leave and nobody is going to lose insurance, it really proves that false. The plan the Republicans have crafted will no doubt cover millions fewer Americans than currently have coverage under Obamacare.

Ryssdal: Is there any doubt in your mind though that the Republicans still get this through at least the House? Let’s set aside the Senate for a second.

Kliff: Yes, I think they still have a chance. Never say never, right? The Affordable Care Act was declared dead a dozen times in the process of drafting it. I remember looking at old blog posts I wrote back then saying this law doesn’t stand a chance, so I will not make those projections. But it’s going to be hard, and you kind of question what Republicans are doing here, what is their goal with this bill? Because it’s certainly not to expand coverage or even keep the expansion from the Affordable Care Act.