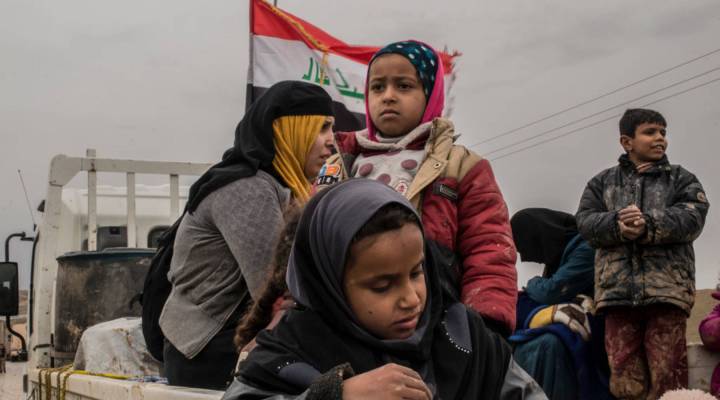 President Donald Trump signed a new executive order on international travel today. Unlike the order issued in January, the new order excludes Iraq from the list of restricted countries. BBC correspondent Rami Ruhayem has been reporting from Iraq on the conflict in Mosul. Marketplace host Kai Ryssdal talked with him about what’s happening on the ground in Iraq and reactions to Trump’s latest executive order on international travel. Below is an edited transcript of their conversation.

Kai Ryssdal: You were up in Mosul over the weekend. Tell me what it’s like up there in the parts of that city that have been liberated, I guess.

Rami Ruhayem: In this neighborhood, life appears to be coming back slowly. We saw a marketplace. People were selling music CDs. They were selling cell phones. They were also complaining about the services in the city, especially about water. The main piped water pipes have been broken, damaged during the fighting. So the eastern part now, which is under Iraqi government control, is in very urgent need of a solution for the water problem. But other than that, we didn’t see much to suggest security problem so far, but it’s too early to tell.

Ryssdal: You said before we turned the microphones on that you had been to several camps for internally displaced persons. What’s that like? What did you see there?

Ruhayem: Well, the one I went to a couple of days ago on Saturday was called Hammam Ali. It’s this is an area just south of Mosul. And the numbers are staggering. We’re talking possibly 10,000 a day during the past few days. We’re also talking about 50,000 since the battle for western Mosul started last month but probably more than half of that just in the last few days. So we’re talking a sudden upsurge as the battle intensifies for western Mosul. With such a situation, the authorities as well as NGOs are struggling to provide for these people coming out, and then they have to move them from the camp, which is now at full capacity, to other camps — those closer to Erbil for example, which have been established for much longer and where conditions are much better.

Ryssdal: I’m not sure if you’ve heard the news from the United States this morning, the new travel executive order that’s out from the president and taking Iraq off that list. Part of the reason, he said, was because Iraq is a partner with the United States in operations like Mosul. What is the perspective you think of the people up there who are actually dealing with it on this travel ban and the way the Trump administration has been going about it?

Ruhayem: Well, it’s all been quite messy and chaotic. I’m sure I don’t need to tell you that. But in terms of Iraq, it’s even more complicated. You’ve got many people working with the Iraqi government from the American army. So you have a very close military relationship between the government of Iraq and the government of the United States. I think that’s the No. 1 complicating factor. It just doesn’t look good. But right now the immediate reaction to the news coming out today was one of relief. The Iraqi foreign ministry said that this is a very welcome step and it will safeguard what they call the strategic relationship between the two countries.

Ryssdal: Rami, thanks so much. That’s Rami Ruhayem, the BBC’s Arabic correspondent. We got him in Erbil, Iraq.