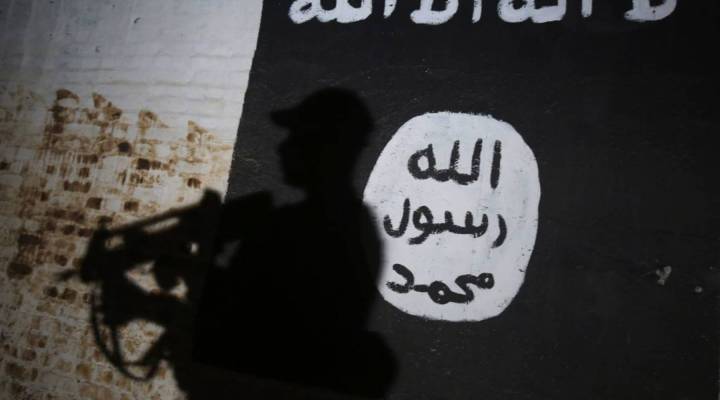 COPY
A member of the Iraqi forces walks past a mural bearing the logo of the Islamic State group in a tunnel that was reportedly used as a training center by the jihadists in the village of Albu Sayf on the southern outskirts of Mosul in 2017. AHMAD AL-RUBAYE/AFP/Getty Images

A member of the Iraqi forces walks past a mural bearing the logo of the Islamic State group in a tunnel that was reportedly used as a training center by the jihadists in the village of Albu Sayf on the southern outskirts of Mosul in 2017. AHMAD AL-RUBAYE/AFP/Getty Images
Listen Now

In 2014, ISIS declared a caliphate — a traditional form of Islamic rule. It controlled territory in Syria and Northern Iraq about the size of Great Britain. By the end of 2017, it had basically lost it all. In its retreat, ISIS left behind paperwork — detailed records of how it functioned as a bureaucracy. In five separate trips back to Iraq, New York Times foreign correspondent Rukmini Callimachi brought back 15,000 ISIS documents that help tell the story of ISIS as an administrative state. It’s the subject of a new audio series. She talked with Marketplace host Kai Ryssdal about her reporting. The following is an edited transcript of their conversation.

Kai Ryssdal: When you first started finding these documents, how long did it take you to realize what you had?

Rukmini Callimachi: I realized the very first day, because the first find that we had was in a small village called Omar Khan southeast of Mosul. And it was hundreds of records of land seizures that ISIS had confiscated from Christians and Shias. And so right away you saw this, if I can say it, Nazi-level attention to detail in cataloging every piece of property that they were taking from the minorities and religious groups that they were chasing out.

Ryssdal: And they were then taking that property, just to get back to that level of detail, and renting it, taxing it, selling it and documenting every single transaction along the way.

Callimachi: Exactly. This is the thing that has always mesmerized me about this group. This is a group that very much owns its crimes, it owns its atrocities. There’s no effort to sit here and sugarcoat this. They cite verses from Islamic jurisprudence and from the Koran to justify what they are doing. In their minds, this is completely legitimate and there’s nothing wrong with it.

Ryssdal: So I’m going to pick a detail actually and ask you to talk about that very idea. More than once in all the great interactive stuff on the Times’ site and on your articles, it points out that the system, the administrative state, worked better under ISIS than it had under previous regimes. I want you to talk about garbage collection.

Callimachi: Sure, if I could just add one caveat: It worked better in certain sectors.

Callimachi: And regarding specific services. But a big one was garbage collection. And this I heard all over Northern Iraq, and that seems to be a constant in other parts of the caliphate as well. What people said is that during the Iraqi government time, the garbage sweepers and the drivers of trash compressors would just kind of zip through their neighborhood, they wouldn’t stop really to pick anything up. People had to kind of run behind the garbage compressor to go dump their trash. And as a result, the city was not very clean. ISIS comes in, a new discipline is imposed. The thing that’s interesting is it was the exact same street cleaners as before. The street cleaners did not change, what changed is the iron fist that ISIS brought to this and the threat of violence.

Ryssdal: How come for the first number of years that we were trying to figure out what ISIS was, how do we get it so wrong? How did we get the financing so wrong and think that it was all oil? Bbecause that was all you heard — they’re financing themselves with oil, and bomb the oil fields and it’ll be fine.

Callimachi: Well, I mean, not to draw attention to myself or anything but —

Ryssdal: [laughs] Look, you did the work, right?

Callimachi: There were quite a few voices in the wilderness that were saying from early on, “This doesn’t make sense.” It’s just that this idea of the black market oil, I think it really captured the imagination. It seemed to fit what people thought of this group. You know, this big, bad group that is doing criminal things. So it was black market oil smuggling, it was ransoms for hostages. People were obsessed with these exotic forms of financing. And in fact, it was just something much more mundane: It was the dirt under their feet, the people that they controlled who were forced to pay taxes and the commerce that those people generated, which in turn was also taxed.

Ryssdal: And they were so organized — they printed new letterhead, they had their own DMV, for crying out loud.

Callimachi: Their own DMV. Oh, my God, the DMV document, that’s one of my favorites. It’s a sale of a car between two people in Mosul, and the fine print is the Islamic State saying the seller and the buyer both agree that they have inspected the car, that the Islamic State is not responsible for any defects that are discovered after this purchase. I mean, it just sounds like the kind of contract that you and I sign when we go to buy something from a used car dealership.

Ryssdal: We ought to point out here that for all the money that they got through taxation and confiscation and all of that, it’s expensive to run an administrative state like they were doing.

Callimachi: It is. And so when people hear about the millions that ISIS was making and, you know, the descriptions of them being the richest terrorist group in the world, I think people instantly assume that, OK, well, they’re doing it for profit. This is corruption at the core. And in fact, the salary slips that I found show that this group had really big bills, right? Just as they were making a lot of money, they also had an enormous personnel that they were maintaining. And they had a war effort that was being fought on multiple battlefronts. All of that is expensive to maintain. So this was a group that was making money to sustain itself and to reinvest in its territory.

Ryssdal: Get me to the moral of the story then, because ISIS has lost almost all of its territory. And yet the point of this piece in all the work you have done digging through the buildings in Iraq and all the trips you took is that the blueprint, the administrative infrastructure, remains.

Callimachi: Right. So No. 1, this is the blueprint that they used and it worked. They were able to hold onto this territory. And so we believe that this blueprint is going to be used again. It behooves us to understand how this group pulled off and what it pulled off so that we can try to avoid this in the future. We keep on just turning them into cartoon characters, into the bogeyman, and missing this larger administrative aspect that is very much at the core of what they’re doing. 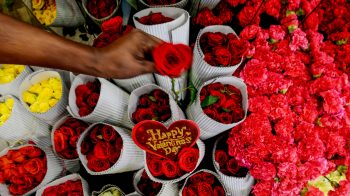