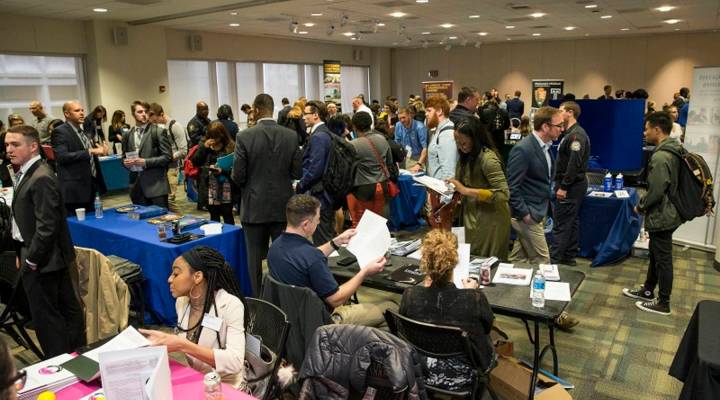 During his speech to Congress on Tuesday night, President Donald Trump reiterated his pledge to step up immigration enforcement, saying Americans cannot succeed in  “an environment of lawless chaos.” In memos, his administration has said it plans to hire 5,000 additional Border Patrol agents and 10,000 Immigration and Customs Enforcement officers within the next several years.

The government is holding information seminars around the country about jobs with Border Patrol. At a career fair for criminal justice students at Temple University in Philadelphia on Wednesday, traffic was heavy at the table of Homeland Security Investigations, a division of Immigration and Customs Enforcement. The division is tasked with pursuing cases involving international gangs, smuggling and human trafficking.

That kind of  work sounded attractive to Adam Leasure. The 19-year-old undergraduate, who set his sights on a job in federal law enforcement as a sophomore in high school, wore a suit. He had come to find an internship. Leasure acknowledged that the spotlight is currently trained on immigration enforcement under the Trump administration.

“Immigration, it’s a hot topic right now,” he noted, “but I think that when they enforce the laws they have to, such as getting the big cartels and that stuff out of the border, I think it’s very important and very interesting.”

The two recruiters representing the department at the career fair said they couldn’t talk to members of the press. But Holly Logan, the staff member at Temple whose job is to connect public employers and students, said the U.S. Office of Personnel Management had told university career advisers on a conference call the day before to expect a push for border agents. So Logan expects to see more recruiters as a part of that effort, “that they would attempt likely to come on campus more and to interact more with students in a variety of ways.”

Customs and Border Protectionl in particular had already been struggling to fill open positions under the Obama administration. Part of the reason is the agency’s screening process, in place because of the temptations that come with working on border smuggling routes. However, the remote work locations and other demands of the job also make recruitment and retention challenging.

“Criminal justice students,” she noted, “are always interested in federal law enforcement because it actually pays much better than regular, local county or city agencies are going to pay.”

While the Trump administration’s plan to hire more immigration agents was news to Janine Simmons, a political science student from the Washington, D.C., area looking for a federal job, she was happy to hear it.

“That’s helpful. That’s encouraging,” she said, “especially [when] hearing people [are] having difficulties getting jobs out of college.”

Talibe Hall, another senior in the job market, is looking at everything from working in a city police department to a federal role in law enforcement. When asked about whether politics in Washington, D.C., might influence his decision about whether to pursue something local or national, he said it could.

“You’re going to think about things more,” he said, “know what you getting into and know when people look at you what you’re going to represent in their eyes.”

He declined to elaborate on whether this consideration tended to push him one way or the other. “Right now we’re at a career fair, and I’m looking for a job,” Hall said.

Correction: In a previous version of this story, the headline misstated the agency represented at the college fair. The story also misstated the name of Customs and Border Protection. The text has been corrected.