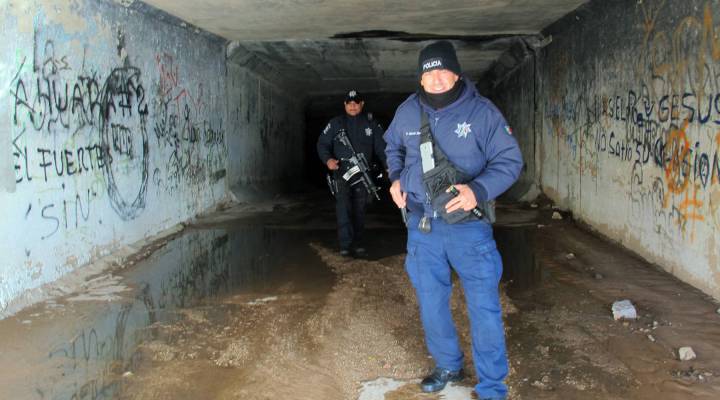 President Donald Trump likes to point out how his real estate projects, including the Trump hotel near the White House, typically come in early and under budget.

That doesn’t look like its going to be the case with the wall along the U.S.-Mexico border.

According to a U.S. Department of Homeland Security report reviewed (it was seen, not obtained) by Reuters, the wall will cost far more than estimates put forth by congressional Republicans — 21.6 billion, compared to estimates of $12 million to $15 million. And it will take more than three years.

In the meantime, a big chunk of the day-to-day of work of dealing with illegal border crossings will fall to the cops and sheriffs, like Sgt. Omar Rodriguez, in the communities on the border. Rodriguez, who’s with the Santa Cruz County Sheriff’s Office in Nogales, Arizona, has been patrolling the U.S.-Mexico border for years. He knows its mix of cattle ranches, golf courses and scrubby desert so well, he can navigate it in the dark, which is often when he’s on duty.

“There aren’t many street signs or anything like that,“ he said. “So everything is landmarks. That’s how we guide ourselves.”

He knows where he’s headed, for instance, when his truck rumbles over cattle guards embedded in the road, or when a particularly large mesquite tree comes into view.

And there are other sights.

During border patrols, Rodriguez frequently backs up federal border patrol agents, who often can’t do the things he can do, like make routine traffic stops. He said they often let local law enforcement know that there’s a suspicious vehicle in this area, for instance, and ask if they can check on it. Rodriguez said he doesn’t make as many stops as he did in the past.

“I would say five, six years ago, we would stop vehicles with immigrants on a daily basis. Nowadays it’s rare,” he said, adding that people who cross now are being particularly cautious, so activity has gone down.

When he isn’t working with border patrol, he has other duties, some of them pretty grim.

“Unfortunately, we get remains from our foreign nationals we have to recover,” he said.

Some people die trying to cross the desert. Others are victims of violence associated with drug trafficking. Sometimes, he said, he has to hike more than a mile into the wilderness over rough terrain to bring the bodies back.

Rodriguez doubts more walls or more technology will stop people from crossing the border. He points to the tall concrete and metal fence that snakes along the horizon. People still climb them like they were ladders.

“You can see people climbing those posts like it was nothing, with a 40-pound bundle on their back,” he said. “I don’t know how they do it.”

It can be a very different experience for border guards on the other side of the line in Nogales, Mexico, a city virtually controlled by drug cartels.

A group of journalists was led on a tour of some of the tunnels used by migrants and drug smugglers. Romero Garcia of the Nogales Municipal Police escorted the visiting group. Like many law enforcement officers in the city, he is heavily armed with automatic weapons. Through a translator, he told how police receive “reports from citizens that there are strange people in the tunnel,” and the pursuit begins.

It’s fairly easy to enter these particular tunnels, which are huge storm drains, from wide entrances on the street. At this time, the water inside is only ankle deep. But Garcia said during heavy rains, it can rise quickly and pick up speed, drowning the unsuspecting.

Garcia said migrants use the tunnels more than the drug smugglers, attempting to get as close as possible to the border. But the drainage tunnel itself isn’t a particularly stealthy way to gain entry. Even underground, as you approach the border, there is a light at the end of the tunnel. Then heavy metal gates come into view. And before long, you’re face to face with American border patrol agents, and the trip is over.