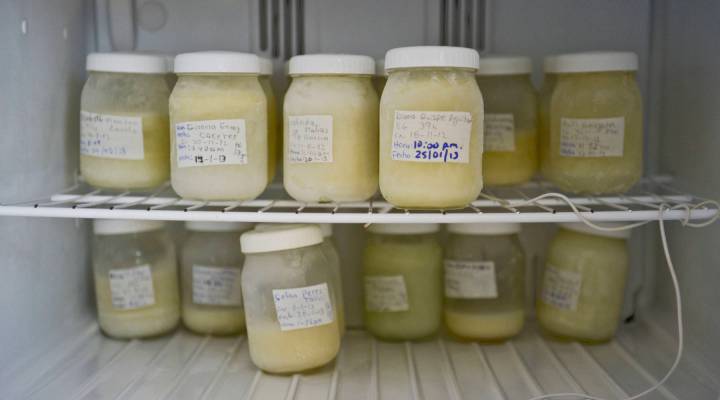 Kimberly Spires donates breast milk to mothers and babies who need it. It’s not always an easy thing to do when she’s on the job as a captain in the Texas National Guard.

Dressed in her fatigues, Spires said she donates her surplus milk for free because she has assisted in too many disasters and seen other moms lose their entire milk supply. But keeping her milk coming isn’t always easy.

For mothers who cannot breast feed their babies, there is an established market for surplus breast milk. It’s sold through online marketplaces and nonprofit breast milk banks. But the milk is pretty expensive. It can sell for anywhere from $2 an ounce, to as much as $6 on websites like OnlyTheBreast.

One reason breast milk can be pricey is it’s hard to preserve. Donated milk from moms like Spires is shipped to banks like the Mothers’ Milk Bank at Austin in Austin, Texas. Then, it has to be screened for the presence of drugs or diseases, pasteurized and stored in freezers, said the milk bank’s  Executive Director Kim Updegrove.

One food scientist in Guadalajara, Mexico is looking into that “something.” Blanca Aguilar Uscanga is with the University of Guadalajara.  She said milk banks in Mexico approached her with the same concerns as those in the U.S. Speaking  in Spanish, Aguilar Uscanga said the banks asked if there was a better technology. “Certainly!” she said she told them. “We could dry the milk.”

What she means by “drying the milk” is turning it into powder through a technique called spray-drying. It’s a technique that removes excess water from liquid that is fast,  and it is already widely used for other foods.

Clair Hicks with the University of Kentucky is an expert on spray-drying. “Spray -dried products are all around us,” Hicks said.  If you look at a chip, for instance, “the coating like the buttermilk coating or the cheese coating… is produced in a spray-dryer.”

Spray-drying is also inexpensive. According to an article published in the Journal of Food Science, spray-drying can be up to 50 times cheaper than other techniques used to handle liquids.

The Human Milk Banking Association of North America (HMBANA) is the group that sets the standards for 26 breast milk banks in the United States.  Mary Michael Kelley, who runs the organization, said she doesn’t know “how [the milk] is processed” when it’s spray-dried or “how it’s handled.”

She questioned the technique and wondered how it would work on breast milk. But, she also called it, “an interesting concept for sure.” Kelley said she knows that the way HMBANA currently handles milk, which includes pasteurization to keep the supply safe, works.

Soon Kelley and other breast milk advocates may be able to see whether the spray-drying technique works as well.  Aguilar Uscanga is running a pilot project in Mexico where she’s testing the process with a small group of hospitals in Guadalajara. Her hope is that larger hospitals will eventually show an interest in powdered breast milk, too.