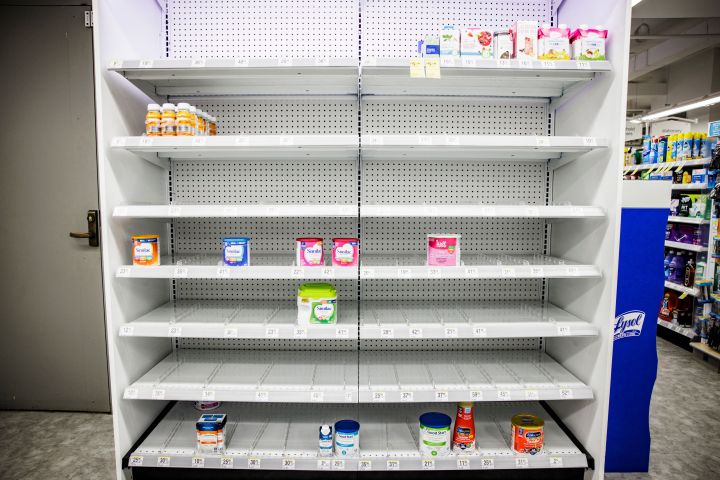 As the formula shortage drags on, there have been calls for parents to turn to breastfeeding. Many of them are from unofficial sources. But breastfeeding is not a simple process, and there are lots of costs to doing it.

The federal government recommends that infants be exclusively breastfed for the first six months. In the U.S., there are lots of barriers to doing that, including cultural ones. Jordan Perelle, a mom in Atlanta, points out that there’s a split between the desire to have infants be breastfed and the willingness to accommodate it.

That sentiment can translate to the workplace, as well. Federal law requires employers to provide time and space for women to express breastmilk. But it’s way easier to make time and find space in higher paying jobs, points out Phyllis Rippey, professor of sociology at the University of Ottawa, and author of the book “Breastfeeding and the Pursuit of Happiness.”

“There’s a class-based difference in rates of breastfeeding. The people who are doing the quote, unquote best, meeting the targets, are the people who have access to paid parental leave,” said Rippey. “They are more likely to have husbands and partners in high-paying jobs.”

The U.S is one of the only wealthy countries in the world that doesn’t guarantee paid parental leave at the federal level.

Another challenge with breastfeeding: Moms need to eat more. Which means there’s the need to buy more food. It requires around 400 extra calories a day.

“If you think about mothers living in poverty … those extra calories can actually be harder to come by then than you might expect,” said Rippey.

There are other costs to breastfeeding, too.

Grace Twesigye developed preeclampsia soon after giving birth, which meant she was separated from her new baby early on to be treated, and couldn’t breastfeed him.

“I was so frustrated because my body wasn’t doing what I wanted it to do,” said Twesigye.

Once they were both back home, breastfeeding was a challenge. Her son was having trouble latching on, and it was really painful. Twesigye’s mom offered to pay for a lactation consultant.

“I freak out because every visit’s $400. What if I need more than one visit? My mom isn’t made out of money. That was so generous of her. She was just like, we’ll take it one visit at a time,” said Twesigye.

It eventually worked, and Twesigye was able to breastfeed her son. When she returned to work (remotely), she was determined to continue providing breast milk.

“I did not want capitalism to be the reason that I stopped breastfeeding,” said Twesigye.

Twesigye moved to a job with a lot more meetings, so she would turn off her camera and pump while in them.

Sometimes it doesn’t work out, no matter how much time, money, and energy parents put into it. When Mary Kennedy’s first daughter was born, the baby wasn’t able to latch on, and kept losing weight. So they finally switched to formula.

“I started crying because I felt like basically I had just failed,” said Kennedy. “I remember saying ‘I guess the formula’s her mom now.’”

With her second daughter, Kennedy tried again. She spent over a thousand dollars buying sessions with lactation consultants, a different kind of breast pump, supplements to increase her milk supply. Much of this wasn’t covered by insurance, and none of it worked.

“It wasn’t just a baby, and the breasts and that’s it. There was a financial cost, as well as the cost of me once again, feeling like I had failed,” said Kennedy.

Kennedy’s younger daughter is now 11 months, and Kennedy says she had moved on, until people started talking about relactation. That’s when a parent starts breastfeeding again weeks or months after stopping.

“This is a process that requires a lot of support. It is not an easy process,” said Heather Hamner of the Centers for Disease Control.

For Mary Kennedy, the idea brought back that feeling of failure.

“People are saying, ‘Oh, you can relactate,’ and I’m like, ‘What? I’m supposed to start pumping 10 times a day right now to try to get a milk supply back? That’s over,” said Kennedy.

Because just as breastfeeding has costs, so does asking parents why they’re not doing it.